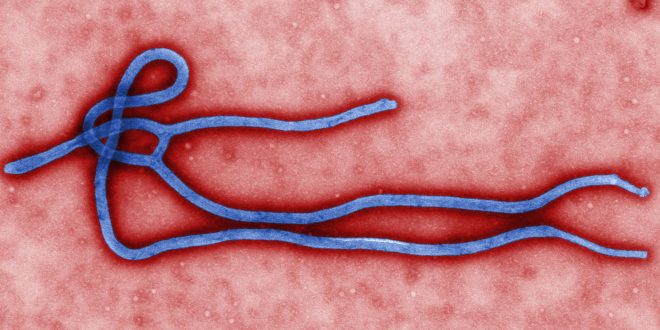 Cynthia Goldsmith This colorized transmission electron micrograph (TEM) revealed some of the ultrastructural morphology displayed by an Ebola virus virion. See PHIL 1832 for a black and white version of this image. Where is Ebola virus found in nature?

The exact origin, locations, and natural habitat (known as the "natural reservoir") of Ebola virus remain unknown. However, on the basis of available evidence and the nature of similar viruses, researchers believe that the virus is zoonotic (animal-borne) and is normally maintained in an animal host that is native to the African continent. A similar host is probably associated with Ebola-Reston which was isolated from infected cynomolgous monkeys that were imported to the United States and Italy from the Philippines. The virus is not known to be native to other continents, such as North America.

The US Food and Drug administration has approved for the first time in the United States a vaccine for Ebola.

The vaccine, Ervebo, was developed by Merck and protects against Ebola virus disease (EVD) caused by Zaire ebolavirus in people 18 and older, the FDA said in a statement.Cases of EVD in the US are very rare and have generally occurred when people already infected with the virus have traveled into the country or when health care workers have become infected treating those sickened by EVD.

“While the risk of Ebola virus disease in the U.S. remains low, the U.S. government remains deeply committed to fighting devastating Ebola outbreaks in Africa, including the current outbreak in the Democratic Republic of the Congo,” said Anna Abram, FDA Deputy Commissioner for Policy, Legislation, and International Affairs.

This new vaccine will definitely help prevent an unnecessary loss of life in the future.