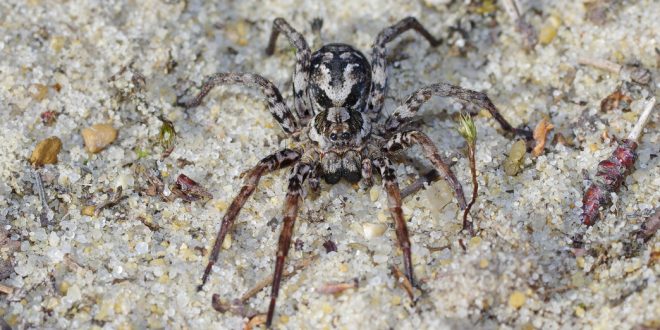 The Great Fox-Spider has not been seen since 1993. This spider is one of Britain’s largest spiders and was discovered on a Ministry of Defence (MoD) training ground in Surrey. The man who found it described it as “gorgeous.”

The spider is 5cm wide, a night hunter, and it’s known for its agility and speed. It is classified as critically-endangered and was assumed extinct in Britain after last being seen 27 years ago on Hankley Common, Surrey. The spider had also been spotted in Modern Heath in Dorset. Only on these sites, located in the warmer south, has the spider been spotted. This makes sense because the spider likes warmer climates and is more common on the European mainland.

Mike Waite, from Surrey Wildlife Trust, discovered the Great Fox-Spider after 2 years of expeditions at night on the Surrey military site. He says he immediately recognized the spider after his torch fell on it.

This spider is one of the largest members of the wolf-spiders. They are known for being ambush predators and not using their web to catch their prey. Although being big and impotent, the spider poses no risk to humans since its main prey are beetles, ants, and smaller spiders.

MoD sites are typically open because military exercises provoke little disturbance to the environment, preventing the succession of shrubs and trees. They are also good places for wildlife because they are protected from human activity and provide large open spaces for animals to move.

In order to find the rare spider, Waite used aerial photos to locate bare sandy patches since this environment suits the spider’s hunting techniques. What’s more, Waite not only found one spider, but also several males, a female, and immature slings. The site is managed by the Amphibian and Reptile Conservation Trust and it is nationally recognized for being an important site for many populations of rare birds, reptiles, and invertebrates, in which sand lizards, smooth snakes, Dartford warbler, and nightjar stand out .

Nick Baker, a British TV presenter for the British Arachnological Society, expressed his excitement of the unusual discovery and stated that the spider is now officially a member of the British fauna again.

The Great Fox-Spider was first discovered 120 years ago and has been seen very few times. The reason behind the difficulty to spot it lies in their behavior and appearance. Since they are nocturnal and have brown camouflage, they are very hard to spot. Additionally, they make burrows under rocks and line them with silk during the winter, making it basically impossible to spot them during the winter.

Waite believes that the spider is more wide-spread than what is thought. Now, he is conducting nocturnal expeditions on sites that are close to where he found the spider recently. He also hopes to write a scientific paper about the Great Fox-Spider and considers it to be the most important discovery he has made in his career.

Previous Boeing 737 Max Cleared to fly in the U.S.
Next Examining Online Exams