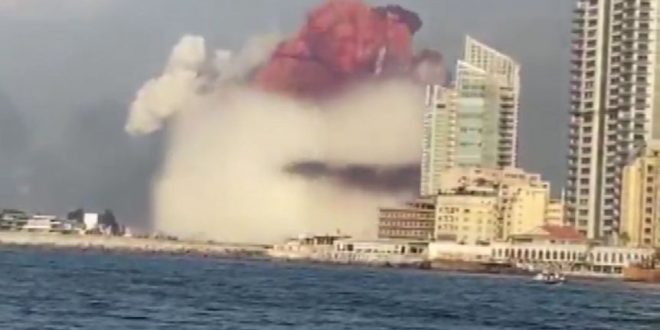 On August 4th, 2020, several large explosions rocked Beirut, the capital of Lebanon. At least 70 people have been killed and it is estimated that over 4,000 others are injured.

Lebanese Prime Minister Hassan Diab spoke of a “dangerous warehouse” that had been located at the port of Beirut since 2014, and blames unsafe storage of the highly explosive chemical ammonium nitrate inside this warehouse for the explosion. President Michel Aoun tweeted about the storage practices of the warehouse, calling them unacceptable.

The explosions that rocked the city caused severe damage to infrastructure and buildings, enough to put the port of Beirut out of action. The explosions reportedly caused a large enough shockwave that it was felt over 10 kilometers away. The explosion also was heard 240km away on the island of Cyprus. Hospitals are said to be overwhelmed in the city.

Lebanon’s Supreme Defence Council released a statement announcing that an investigation is underway to determine exactly what set off the explosion, and stated that those responsible would face the “maximum punishment” possible. President Aoun announced a three-day mourning period, and announced the allocation of 100 billion lira (around $66M) by the government to serve as emergency funds.

The explosions come at a sensitive time for Lebanon, and only further the unrest in the country. Lebanon is currently facing a severe economic crisis and the government has been blamed extensively by citizens for their poor handling of the crisis. Tensions are also high ahead of a verdict in a trial over the killing of ex-Prime Minister Rafik Hariri in 2005 that is set to take place on Friday, August 7th. Lebanon-Israel relations have also been strained, with Israel recently claiming to have thwarted an attempt by Hezbollah to infiltrate the border.