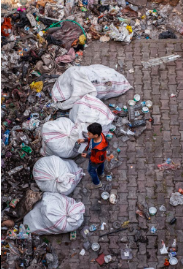 Environment in the Developing World

Around the world, a new wave of activism is spreading as people are slowly recognizing global environmental issues and working to solve them. Though the desire to stop climate change and other prevalent issues is a worldwide concern, it is often the developed countries that spearhead these issues. This disparity is unsurprising, as those countries have the most resources and technology available to create renewable energy sources or enact policy that may make it difficult for businesses to operate efficiently. Since they are already well off economically, they can turn to other priorities such as saving the environment.

As a result, 65% of the world’s emissions are from the developing world. Consequently, it’s impossible to solve climate change once and for all without their cooperation or new efforts from their governments and citizens. On the other hand, it’s also much more difficult for them to undergo these same reforms. This can be due to a variety of factors. For instance, developing countries suffer from weak governance, and passing new policy and prioritizing national reform can be a challenge. Another reason is due to the economic underdevelopment of these countries. They simply do not have the economic capacity to handle changes which may hamper their growth.

Luckily, some of these countries are actively taking steps to combat pollution and similar issues. For instance, a plastic bag ban in Tanzania was enacted in early June, following similar policies in Kenya and Rwanda. Tourists even have to confiscate their plastic bags when they enter national parks or national territory. Despite these positive steps, very few African countries have enacted similar legislation. In the limited third world countries that have passed them, they have been quite effective. Although there has been plastic smuggling from neighboring countries, the laws have constituted an important step towards conservation.