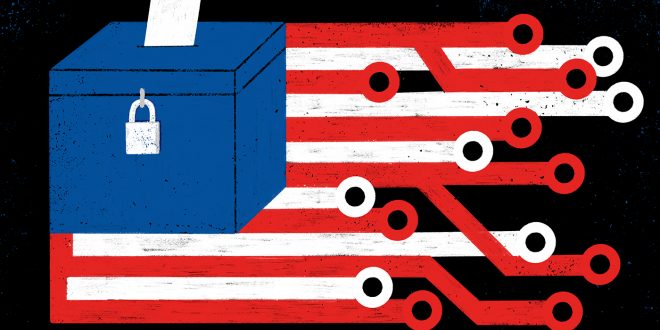 As the presidential elections near, the focus of the people return to election security, especially considering the fiasco of the 2016 presidential election. Plagued by supposed Russian interference, vote miscounts, and many miscellaneous rumors in 2016, the government has teamed up with Microsoft in an attempt to create a more accurate and secure election process. The threat is already quite clear. The intelligence community has already notified US lawmakers of the likely attempts from Russians to interfere in the election in favor of Donald Trump. Interference at the local level is difficult to catch, but can easily end up altering the final result. Officials are in a rush to implement new technology that can hopefully off-put any forms of intercession.

The initial testing started locally, being implemented for an election in Fulton, Wisconsin. The new system is called ElectionGuard, and voting is done on digital tablets that store the votes in memory chips. These chips are then read and their information is then used to print ballots. It utilizes the latest encryption methods creating a more secure voting process. Any tampering done to the results will be made immediately obvious with the new encryption.

“I came in expecting the same old voting process with the little pencils and the forms with the little dots but it wasn’t like that at all,” said Barbara Pifer, a Fulton voter. “It was refreshing to see that they’re trying to do something new and maybe start a process that’s going to be a bit more foolproof and secure.”

Few previous attempts for an improved voting system have all been met with failure, including an app used by Shadow Inc for the democratic caucus, which failed for many users. Microsoft hopes to avoid such a fiasco by ensuring that their app has the capability to handle the pressures of a real election. Of course, Microsoft doesn’t believe that the app is unhackable, but they put emphasis on making any attempts of hacking obvious and traceable. This will allow any inaccurate counts to be redone, overall making for a fairer election. When this technology is implemented in the 2024 election, it will strive to help the people regain trust in our flawed system.