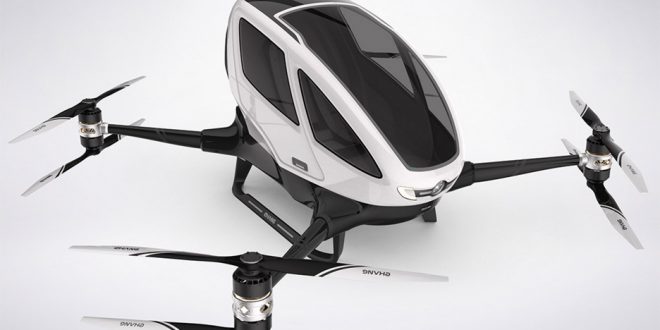 We all know about drones. The little quadcopters that fly around with a camera attached to them, recording things we would never be able to see otherwise. However, people have recently been looking at another aspect of drones: transportation. Testing has begun for a new drone, by a Chinese company called Ehang. It is an electric passenger drone with the capacity to carry 184 people, and it is fully autonomous. It can carry 220 pounds of cargo, fly under 650 feet in the air, and fly for about 23 minute at an average speed of 62 miles per hour. Charging the drone will take about 3 hours, and, as it is a drone, it has vertical takeoff and landing. Ehang is one step into the future, and is looking for the drone to get approved. Imagine a world where there are taxi drones that can fly above any ground traffic and take you where you want to go in record time. The only problems with it right now are the fact that it only has a 23 minute fly time, which will be improved as time goes on, and the lack of manual flight controls. However, the fact of drone taxies still beckons. This could be a colossal form of transportation once approved, and could be piloted by millions one day.

Previous Developing the Next Instagram
Next Dangers of DIY Routines