Home / Lifestyle / Eating to Save the Environment 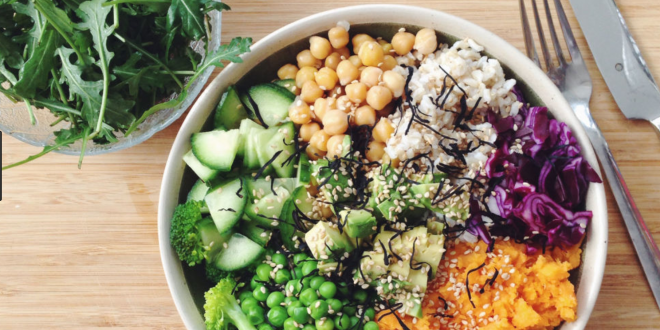 Eating to Save the Environment

Eating has been a lifelong passion of mine. My heart skipped a beat every time someone asked, “How about chicken masala?” I would jump for joy every time my parents told me that we were getting personalized pizzas for dinner. I would always ask for sausage, extra cheese, and more sausage. Maybe pepperoni, too. In fact, my family would address me as “the meat lover” at the dining table. The topic of how I could never, ever give up the umami of meat and switch to a life of vegetables came up many times waiting for food at restaurants. Today, I have completely cut out all meat and dairy products from my diet. How could I, a self proclaimed lover of all foods, take a pass on McDonald’s chicken nuggets, lightly salted poached eggs in the morning, or even seafood paella? And most importantly, why?

The answer: Netflix and boredom. I had read factoids from the documentary “Cowspiracy” a few times here and there while browsing my Instagram feed, but it never piqued my interest enough for me to actually watch it. Mostly because Scandal has six seasons, Criminal Minds has eleven, and hundreds of theories about the identity of “Uber A” on Pretty Little Liars are floating around the internet. But one day, I was sitting in front of my computer, Netflix tab open, warm avocado toast in my lap, looking for something to watch. I had binge watched every episode of Bob’s Burgers and The Simpsons the day before. I was truly desperate until my gaze landed on a rather serious looking photo of a cow. I clicked on it, and it turned out to be the documentary I’d seen so much about. So I watched it.

34 trillion gallons. That is the lowest estimated amount of water consumed by animal agriculture. Annually. In the United States alone. When I saw this, I was taken aback. How is it possible, that all my years of turning off the faucet, taking five minute showers, and fighting the notion that climate change is a hoax was less than a drop in the ocean of environmental change? I did some of my own research and discovered a multitude of conflicting studies done on the amount of carbon dioxide that livestock and their byproducts produce. According to the documentary itself, they account for at least 32,000 million tons of carbon dioxide per year. That would be more than half of the world’s greenhouse gas emissions. Another study from the Food and Agriculture Organization states that they account for 15% of our emissions. Although there is a large discrepancy between the numbers, one thing is sure. Whether it’s 15%, which is still more than the world’s total transportation exhaust, or more than 50%, animal agriculture is detrimental to our planet. It is the leading cause of species extinction, ocean dead zones, water pollution, and is responsible for up to 91% of deforestation in the Amazon. And for what? An In-N-Out burger? Bacon bits on your salad? To this day I cannot grasp how the human race is so selfish that it exploits everything our home has to offer, that we allow each other to continue taking and taking, knowing that the earth’s resources are finite.

Needless to say, it was a wake up call. I realized that I didn’t need to save up for an electric car or collect worms to start a compost bin. Just one day of eating vegan can save up to 1,100 gallons of water, 45 pounds of grain, 30 sq. feet of forest, 10 pounds of CO2, and one animal’s life. From that moment on, I stopped eating meat cold turkey. Pun intended! I know that it is impossible for the everyone in the world to reduce their habit of meat consumption. I know that eating quinoa and kale is much more expensive than a meal from McDonald’s and that there are only so many people who can actually afford being a healthy vegan. So that’s why I didn’t just stop eating meat at lunch on Mondays. I stopped entirely. I stopped because the immediate impact of one person’s choice can already change the direction our environment is heading in.

To help you make that change too, I have collected some of my favorite environmentally sustainable recipes. They’re so good that even my meat loving friends and family enjoy them!