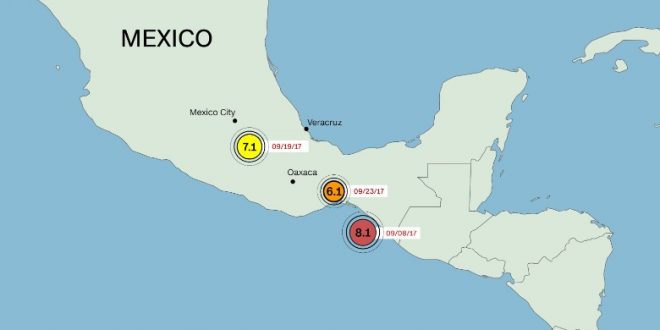 On September 23, 2017, two more earthquakes shook Southern Mexico, further rattling the country’s recovering efforts from the devastation of powerful earthquakes that happened earlier in the month.

According to the US Geological Survey, a 6.1 and a 4.5 magnitude earthquakes struck the city of Oaxaca state, near Matias Romero, a town about 275 kilometers southeast of Mexico City.  Roughly speaking, the epicenter (the point on the earth’s surface vertically above the focus of an earthquake) was between the two more violent earthquakes that occurred in the month– the 7.1 magnitude temblor that hit on September 19 closer to the capital, and the 8.1 magnitude quake that struck on September 8, off the southern Pacific coast, near Chiapas state. In Oaxaca, a bridge and some highways that had been damaged due to the September 8 earthquake collapsed.

The earlier major quakes killed hundreds of people and turned buildings into dust and debris in parts of Mexico. More than 300 people had been killed in September 19 quake; nearly 100 died in the September 8 temblor. Luis Felipe Puente, Mexico’s civil protection coordinator, reported that search and rescue efforts in the Mexico City area could last for at least two weeks.

Roger is a junior at Carlmont High School in Belmont, California. Roger serves as an officer of Help Everyone and Remember to Share (HEARTS) non-profit. Roger founded the first California Business Professionals Association (BPA) club at his high school and is active in other STEM related clubs. Outside of his busy school schedule, Roger practices karate, plays saxophone, reads, and volunteers for several worthy social causes in the US and China. Roger is extremely honored to serve as the News Column editor for the Rising Star Magazine.
Previous Speaking Up for School
Next Learn by Appreciating Ourselves, Not through Comparing Ourselves