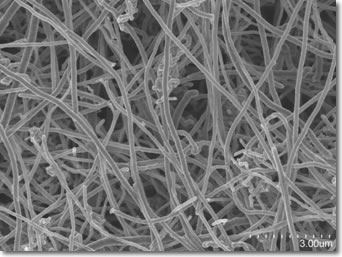 Diamonds From the Sky

Finding technology to help lower pollution has been a long road, but now there is a new process that may help reduce CO2 levels. Now, a team of chemists says they have developed a technology to economically convert atmospheric CO2 directly into highly valued carbon nanofibers for industrial and consumer products.

“We have found a way to use atmospheric CO2 to produce high-yield carbon nanofibers,” says Stuart Licht, Ph.D., who leads a research team at George Washington University. “Such nanofibers are used to make strong carbon composites, such as those used in the Boeing Dreamliner, as well as in high-end sports equipment and wind turbines.”

Licht calls his approach “diamonds from the sky.” That refers to carbon being the material that diamonds are made of, and also hints at the high value of the products, such as the carbon nanofibers that can be made from atmospheric carbon and oxygen.

Because of its efficiency, this low-energy process can be run using only a few volts of electricity, sunlight and a whole lot of carbon dioxide. At its root, the system uses electrolytic syntheses to make the nanofibers. CO2 is broken down in a high-temperature electrolytic bath of molten carbonates at 1,380 degrees F (750 degrees C). Atmospheric air is added to an electrolytic cell. Once there, the CO2 dissolves when subjected to the heat and direct current through electrodes of nickel and steel. The carbon nanofibers build up on the steel electrode, where they can be removed, Licht says.

Licht estimates electrical energy costs of this “solar thermal electrochemical process” to be around $1,000 per ton of carbon nanofiber product, which means the cost of running the system is hundreds of times less than the value of product output.

Previous The Way to the Soul
Next How Sharks Save Lives