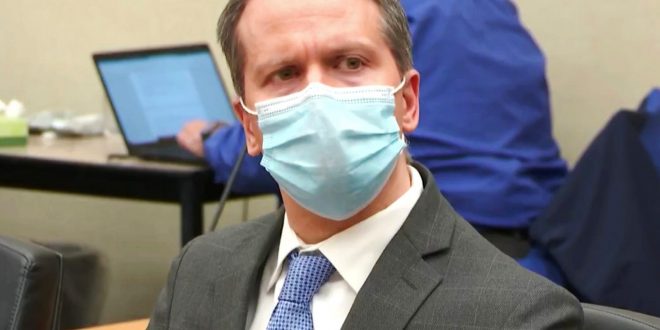 Derek Chauvin, former Minneapolis Police officer who knelt on George Floyd’s neck for more than 9 minutes last year was found guilty on Tuesday of all three charges against him in one of the most significant and consequential trials of the Black Lives Matter era.

Chauvin, 45, was convicted of second-degree unintentional murder, third-degree murder and second-degree manslaughter. The jurors deliberated for more than 10 hours for two days before coming to their decision.

Due to wearing a mask inside of the Hennepin County Courthouse in Minneapolis, Chauvin apparently did not have a reaction to the guilty verdict. Afterward, his bail was revoked and he was placed in handcuffs and removed from court through a side door.

Chauvin was taken to a facility in Stillwater, Minnesota, a town around 25 miles east of downtown Minneapolis, according to officials.

Chauvin could face up to 40 years in prison for second-degree murder, up to 25 for third-degree murder, and 10 years for manslaughter. Minnesota’s sentencing guidelines recommend about 12.5 years in prison for each murder charge and about four years for the manslaughter charge. In Chauvin’s case, the state has asked for a tougher sentence than the recommendations provide. Chauvin’s sentencing is set for eight weeks from now.

This verdict is timed about 11 months after a bystander video was released on May 25th, 2020, showing Chauvin kneeling on 46-year-old African American man George Floyd’s neck for a total of 9 minutes and 29 seconds.