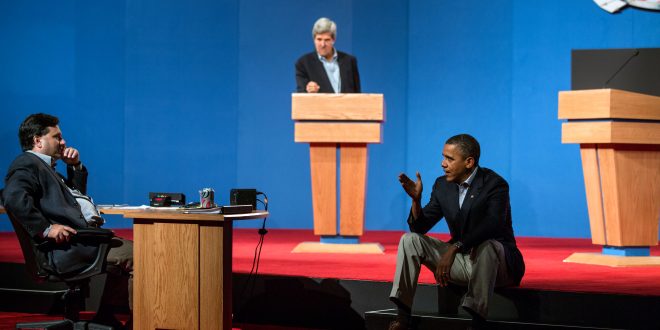 Oct. 2, 2012 "The President talks with Ron Klain during debate preparations in Henderson, Nev. Sen. John Kerry, background, played the role of Gov. Mitt Romney during the prep sessions." (Official White House Photo by Pete Souza) This official White House photograph is being made available only for publication by news organizations and/or for personal use printing by the subject(s) of the photograph. The photograph may not be manipulated in any way and may not be used in commercial or political materials, advertisements, emails, products, promotions that in any way suggests approval or endorsement of the President, the First Family, or the White House.

Over the past few weeks, America has been caught in the whirlwind we know as the 2020 democratic presidential debates. With four nights over a total of two rounds already completed, the world has seen the presidential candidates’ policies, values, and presentation skills. The twenty candidates have come forward with their best attempts at convincing the audience that they are the best choice for the American people. Logically, it would seem that the debates would be an effective way of educating the public of the candidates’ views and allow them to make an informed decision on Election Day. However, the debates have often ended up as an opportunity for candidates to spew multifarious rhetoric and wield any question as an opening to drag down their peers.

One specific tactic overly used in the debates is the degradation of Donald Trump. Regardless of the truthfulness of their allegations, the presidential candidates have adopted the knee-jerk reaction of beginning their responses with a seemingly obligatory insult toward his character or actions. They have an interesting predilection for vociferous remarks of Trump’s incompetence, and often vocally demand a Democrat as president in 2020. This sort of comment elicits widespread concurrence and applause–––quite unsurprisingly, after all, since preventing Trump’s re-election is something literally everyone present at the debates would strive for. These candidates’ attempt to ingratiate themselves with the audience provides no valuable information about their policy positions, but rather wastes precious time with statements not contested by anyone in the room.

The same effect occurs when candidates blatantly refuse to answer the question asked. When the moderators present an inquiry the target candidate does not have a sufficient response to, the speaker often redirects the question or simply begins ranting about a completely unrelated subject. Sometimes, effective speakers will be able to weave in a convincing narrative about an utterly irrelevant subject, thus attracting applause and approval. However, the simple fact that many questions are neglected detracts from the educational value of the debates. Careless viewers will often get caught up in the rhetoric, completely missing the fact that the candidate side-stepped the initial inquiry.

Another common strategy seen in the debates is the constant disparaging of the other candidates on the stage. It seems that when any buzzword is mentioned that might remind someone of a potential insult, candidates aggressively assail their peers’ characters and past choices. Of course, this is strategically done in an attempt to increase their own rankings: by putting others down, they theoretically rise up. The structure of the debates only encourages this antagonism, creating a hostile environment of tension and constant attacks. As a result, this distracts from the positive aspects of each candidate themselves, and instead redirects attention to the fault in others.

Overall, the current format and culture of the presidential debates are not only moderately effective at education but also create a hostile culture nowhere conducive to positive reforms.