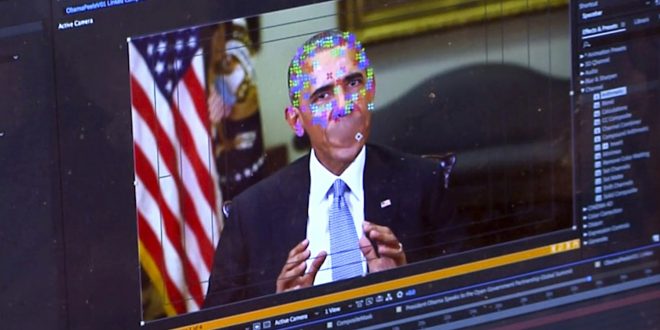 This image made from video of a fake video featuring former President Barack Obama shows elements of facial mapping used in new technology that lets anyone make videos of real people appearing to say things they've never said. There is rising concern that U.S. adversaries will use new technology to make authentic-looking videos to influence political campaigns or jeopardize national security. (AP Photo)

Recently on the internet, a new form of video editing has appeared, called deepfake. Deepfakes are audio of someone saying something put into a video of someone else doing something. The original video/audio is manipulated so that actions and speech of someone else can be inserted into an existing person. It’s no wonder the government is scared of this new technology sweeping the internet. Though it can be used for fun purposes, like inserting Nicholas Cage into videos (https://www.cnn.com/videos/business/2019/02/01/deepfakes-interactive-what-is-a-deepfake-intro-orig.cnn), but it can turn scary in a moments notice. Deepfakes can be used to make anyone say anything, and if used against a president or a celebrity, or organization, there could have serious effects. Thankfully, the government is massing a group of video analysts and hackers to combat this new digital threat. The analysts check to see if the video is unedited by comparing the voice of the person in the video to the real voice of the person. Most of the time, this technology isn’t available. So video analysts use AI to check if the words being said correspond to the motions of the person’s lip, and if the words the person is saying are authentic or not. Now, deepfake technology has advanced to be able to simulate changing weather patterns and how flowers bloom. Nobody yet has tried to use deepfakes to initiate an information warfare campaign against a specific individual or group, but something of this sort could happen in the near future. However the government is gearing up and always has to be ready for new types of threats, especially on the digital frontier. It’s always good not to believe everything you see on the internet at first glance, because practically anything could be a deepfake video in disguise.

Previous Be Straightforward
Next Dental Anesthesia