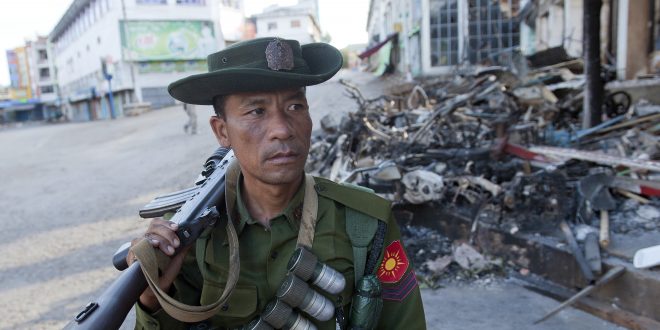 A soldier stands guard in dowtown Lashio , Northern Shan state of Myanmar on May 29, 2013. Myanmar's government called for calm after mobs burned down a Muslim orphanage, a mosque and shops during a new eruption of religious violence in the east of the country. AFP PHOTO / YE AUNG THU (Photo credit should read Ye Aung Thu/AFP/Getty Images)

At least 20 people have been killed as a result of violent clashes between Myanmarian security forces and opposition-backed militias, according to Myanmar media, in the most severe cases of violence since the opposition called for a “people’s defensive war” against the military junta this week.

The most recent clashes come after activists have urged the international community on Saturday to take action, saying that the lack of any significant international assistance to their movement has led to the violent fighting.

“The young people of Myanmar have no choice but to fight back with what they have,” said the Civil Disobedience Movement early Saturday, as it called upon the United Nations and the Association of Southeast Asian Nations to provide support for the opposition National Unity Government (NUG).

Ahead of a UN General Assembly meeting to decide who represents Myanmar, the opposition is also launching a media campaign this week to push for the recognition of the NUG as the legitimate representative of Myanmar

The NUG, established in resistance of the military takeover on February 1st, had called for coordinated revolts against the junta’s rule in an effort to organize resistance groups and possibly convince junta forces to switch sides.

The Assistance Association for Political Prisoners, which has been closely monitoring the human rights situation in Myanmar, more than 1,058 people have been killed since the uprising against military forces began in February, and more than 6,300 have been detained.

A battle that has been raging since Thursday over Myin Thar village resulted in severe casualties for both militia forces and villagers. According to witnesses and media reports, military forces fired artillery and burned down houses in the village, killing 20 people.

Social media posts over the weekend paid their respects to the people killed, including several minors.