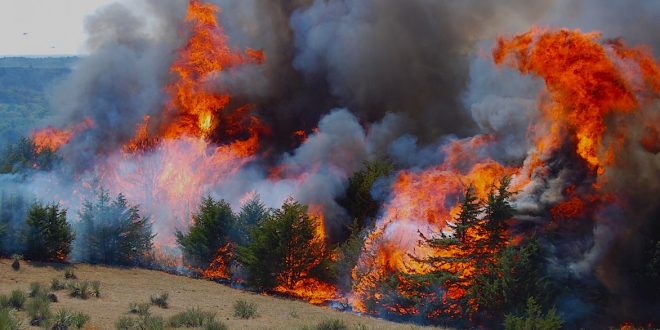 By Megan Tjandrasuwita and Kevin You

Early dawn on October 14, 2017, hundreds of emergency personnel woke up residents of Santa Rosa, California, urging them to evacuate from a rapid approaching and intense wildfire that started six days ago and had already caused the tragic destruction of multiple neighborhoods in the city and surrounding area. More than 10,000 firefighters coming from United States, Canada, and Australia are still battling 16 active wildfires around the state with the majority of the firefighting effort concentrated in areas north of the San Francisco Bay Area.

The October 2017 fire season has turned out to be the deadliest fire season in California. A total of 17 fires have broken out throughout the state and burned more than 217,000 acres, forcing the evacuation of about 100,000 residents. It ended up destroying more than 5,700 homes and businesses and killing at least 40 people with hundreds still missing, according to California Department of Forestry and Fire Protection (Cal Fire).

The majority of the damage is caused by the cluster of fires in the Northern California counties of Sonoma, Napa, and Mendocino. A combination of strong winds, low humidity, and high temperature fueled multiple wildfires that erupted late in the night on October 8 and early in the morning on October 9, catching many homeowners in their sleep and causing multiple fatalities. Santa Rosa, a city in Sonoma County, was one of the hardest hit with at least 22 fatalities and 2,834 homes and buildings destroyed so far including the city’s fire station and home of the late Charles Schultz, the cartoonist who created ‘Peanuts’. Many evacuated residents have complained that they did not get evacuation notice and a few who called 911 to report the fire were told not to evacuate, though minutes later, they were forced to flee for their lives from the incoming fires. Furthermore, the fires have caused many road closures and extremely bad air quality throughout the San Francisco Bay Area.

The causes of the North Bay fires are still unknown. Authorities are investigating downed power lines and transformers that occurred on October 8 as possible cause of the fires in Sonoma County. Communities surrounding the affected area are coming together to work with authorities and disaster relief organizations such as the Red Cross and Salvation Army to set up multiple temporary shelters for evacuated residents and to provide them with basic necessities. Many in the communities are also organizing support for the first responders by providing them with meals to show their appreciation. Some of the local policemen, firefighters, and health care providers who are fighting the fires around the clock are also among those who lost their homes. Continuous fire fighting efforts have made some progress in containing the wildfires, but it is far from over. Favorable weather conditions in the next few days are expected to significantly help the firefighting effort; however, it will still take weeks before the fires are fully contained, and it will most likely take years for the affected communities to recover.

Roger is a junior at Carlmont High School in Belmont, California. Roger serves as an officer of Help Everyone and Remember to Share (HEARTS) non-profit. Roger founded the first California Business Professionals Association (BPA) club at his high school and is active in other STEM related clubs. Outside of his busy school schedule, Roger practices karate, plays saxophone, reads, and volunteers for several worthy social causes in the US and China. Roger is extremely honored to serve as the News Column editor for the Rising Star Magazine.
Previous The Importance of Sleep
Next Accept Ourselves as Who We Are