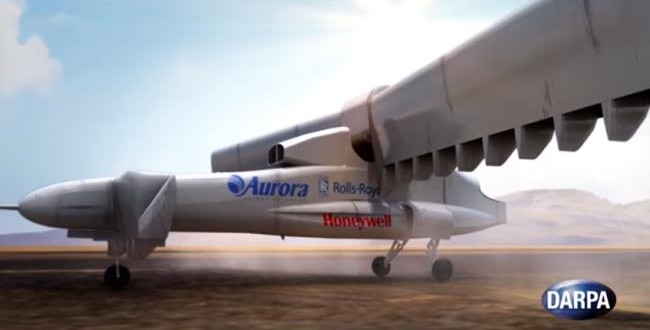 VTOL’s, or vertical takeoff and landing, have had a history of being cool, but suffer from being extremely inefficient. However, DARPA, or Defense advanced resesarch projects agency, has a new design for a VTOL that may solve some of VTOL’s biggest problems and is the most crazy, radical design for a plane ever seen. The program for this new type of plane has been underway for some time now, but just today DARPA announced that they have hired Aurora Flight Sciences to execute the second round of the contract which includes building a flying prototype. It’s called the LightningStrike. It features of a pair of wings on the rear and two much smaller wings mounted on the nose. Both pairs of wings are filled with fans, and the wings will rotate down to create lift. It’s planned to become reality in 2018, and seeks to reach speeds up to 400 knots. It is also expected to carry 12,000 pounds of cargo as well as be more efficient than any other VTOL in use today. By using electricity to drive individual ducted fans, the aircraft’s overall propulsion system design can be simplified and made significantly lighter. This technology also has the potential to greatly increase reliability and reduce maintenance requirements. This also allows each individual fan, or cell, to be controlled depending on each stage of flight. For example, in cruise mode, individual cells can be shut down to save power and increase range. This also means that even if a couple of fans break down, others can compensate for them. The Lightningstrike has uses in the military, being able to carry a large amount of cargo, and yet be able to fly straight up and travel very quickly.

Previous To AP or not to AP
Next Extreme Dieting