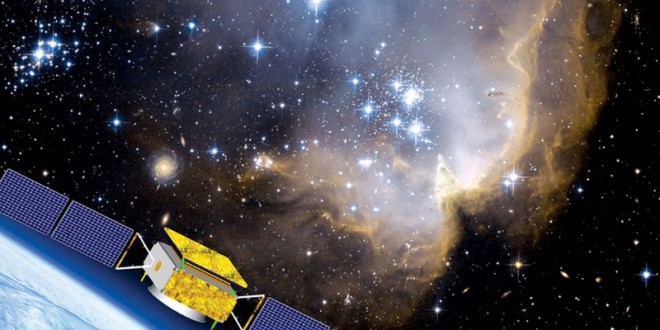 There’s a new player in the hunt for dark matter: China’s Dark Matter Particle Explorer (DAMPE) satellite, which launched on December 17. Ground stations have just received the first data beamed back from DAMPE. With all systems fully operational, the satellite officially begins its three-year mission.

The planets, stars, galaxies and everything else that we see makes up just 4.9 percent of the stuff in the universe. Roughly 26.8 percent is dark matter. (The rest of the stuff — 68.3 percent — is made up of dark energy, which physicists believe is causing the expansion of the universe to accelerate.) We can tell it’s there because of its indirect effects — heck, there’s even a detailed map, thanks to the Dark Energy Survey collaboration — and physicists have been searching for years to directly detect dark matter particles, using instruments in the sky and deep underground, thus far to no avail.

DAMPE — nicknamed “Wukong” after the Monkey King character from a 16th century Chinese novel, Journey to the West — is similar in design to the Alpha Magnetic Spectrometer (AMS), currently aboard the International Space Station (launched in 2011). Both instruments detect gamma rays, electrons, and cosmic rays in hopes of finding clues to what, exactly, the dark matter might be. Thus far, AMS has detected some new antimatter particles, but physicists are hopeful this unexpected excess could be a signature of dark matter particles. DAMPE could help refine the search further.