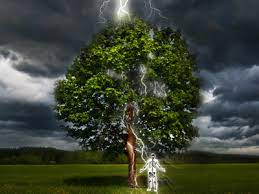 In the Bay Area of California, we mostly think of lightning as a fire hazard. Dry thunder storms, in which most of the precipitation evaporates before reaching the ground, can start multiple fires in drought-stricken areas. Yet, in many areas of the country and the world, thunderstorms can be a daily occurrence, bringing the danger of lightning strike injury.

Lightning strikes the earth’s surface eight million times per day. According to the CDC (Centers for Disease Control), lightning is a major source of weather-related deaths. In 50 years of record keeping, Florida alone has had over 2000 lightning injuries. The highest chance of lightning strike is in the east and southeast from Pennsylvania to Texas. As you might expect, those involved with outdoor jobs and activities have a higher likelihood of being struck, but interestingly, 32% of lightning injury occurs indoors.

How does a lightning strike affect the human body? We know that lightning can heat air to 50,000 degrees Fahrenheit, five times that of the surface the sun. According to Dr. Christopher Griggs, MD, a lightning strike to a human can cause anything from a mild burn to brain death.  Other injuries may include neurological damage or muscular breakdown leading to kidney damage. Even being close to a lightning strike can cause minor burns or even ruptured eardrums from the noise.

In the event you are caught in a thunder storm, the National Weather Service has some tips for keeping safer. You should get off of elevated areas like hills or mountains, get away from open water, like lakes and ponds, and stay away from electrically conductive materials like wire fences and power cables.  Also, you should never take shelter under a tree or under a rocking overhang and do not lie flat on the ground. While there is a 32% chance of an indoor injuring, you can reduce that by staying away from wires and electrical appliances.  Stay away from plumbing, open doors and windows, and metal objects, which are conductors of electricity.

The CDC provides a series of life saving steps for people struck by lightning. You should know that the victim does not hold a charge and is safe to touch. Lifesaving steps:

2)      Move the victim to a safe location to decrease likelihood of another strike.