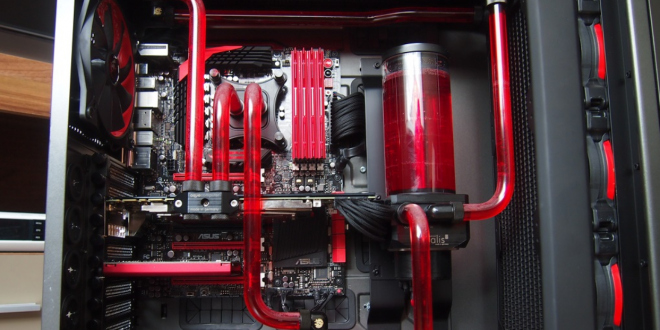 Gaming computers are no longer a rare sight. Nearly 3 million people build their own computers each year. However, some people like to go to the next level. Instead of using the conventional method of fans to cool their entire build, they use water. Anyone who hasn’t taken a high school level course in chemistry may not realize it, but water is not normally conductive. 100% pure water – achieved through deionization or repetitive distillation – will not conduct electricity. Instead, the particles that conduct electricity or generally salt and other minerals that contaminate the water. Also, leaks in a water cooling system will not short circuit for the first 5 minutes, leaving people enough time to react and turn off their computer, making the danger of using water cooling a very safe alternative to conventional methods.

A custom water cooling loop contains 5 essential parts – the waterblock, the radiator, the pump, the reservoir, and the tubing. The waterblock is the piece of equipment that transfers heat from the computer part to the fluid inside the loop. The radiator is a larger heatsink that disperses heat utilizing fins and fans. The pump and reservoir are usually grouped together as the reservoir should always lead into the pump, which is how the water is moved in the loop. There are also fittings and angled adapters which are used to connect the tubing to the parts.

There are two types of tubing – rigid and soft tubing. Soft tubing is generally easier to work with for beginners, but requires more maintenance and needs replacements much more often than rigid tubing. Rigid tubing requires more skill and a heat gun, but lasts for a long time and looks nicer if done well. There are also multiple types of rigid tubing, such as PETG, acrylic, glass, brass, and borosilicate tubing.

Liquid is much more efficient in directing heat away from computer components, which is why it is used in higher end desktops. I personally use a custom loop instead of normal fans because of my setup (i9-9900k, 2080 ti) and computer usage, but custom loops get extremely expensive and people who do not care about overclocking potential shouldn’t waste money on custom loops.