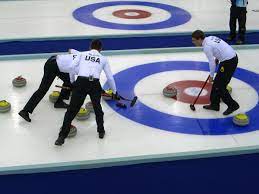 Another Curling season is upon us and since this is a Winter Olympics qualifying year, the stakes are high.  If you are not aware, curling is a sport in which two teams of four compete by sliding granite stones across a long rectangular sheet of ice, 150 feet long and 15 feet wide, toward a target at the other end. Teammates not throwing the stone, but use specialized brooms to sweep in front if the stone, reducing ice friction and helping to guide the stone. Points are awarded on how close the teams stones get to the center of the target, the button.  This is more difficult than it may sound, as the stone tends to “curl” to the left or the right as it traverses the sheet of ice. This is where curling derives its name.

Curling is believed to have originated in the cold climes of Scotland and the Netherlands. The earliest recorded evidence of the sport are paintings by famed Flemish artist Pieter Bruegel from the 1500s. Also, there are written records from Scotland of monks competing by sliding stones across ice on frozen ponds or lochs.  Over the centuries, curling has developed into a sport of skill and strategy. The first official curling clubs were started in Scotland in the early 1800s and the Caledonian Curling Club became the first governing body in 1838, creating an official set of rules. Curling made its Olympic debut in 1924, but was not accepted as an official Olympic sport until 2006.

Curling has gone global and participants from all background are competing around the world. Examples include Brazil and Mexico competing in the 2021 America’s Challenge last October and the Pacific-Asia Curling Championships, being held in Kazakhstan this November. Curling is also a sport that provides a competitive outlet for those with physical challenges. On October 30, 2021, China’s team took gold against Sweden in the World Wheelchair Curling Championship held in Beijing. Upcoming Curling excitement may be found in the 2022 Winter Olympic games in Beijing. So be sure to watch the action, skill and strategy of a game that some call “Chess on Ice”.