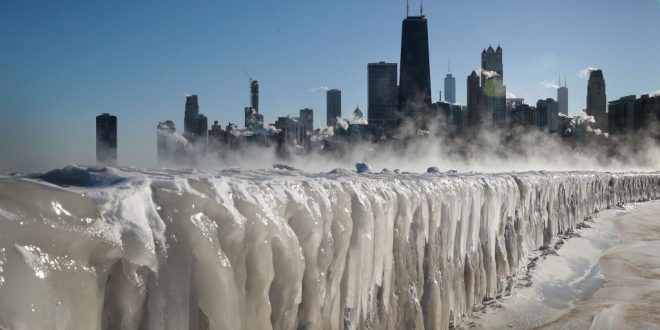 CHICAGO, ILLINOIS - JANUARY 30: Ice covers the Lake Michigan shoreline on January 30, 2019 in Chicago, Illinois. Businesses and schools have closed, Amtrak has suspended service into the city, more than a thousand flights have been cancelled and mail delivery has been suspended as the city copes with record-setting low temperatures. (Photo by Scott Olson/Getty Images)

For the better part of a week, the U.S. midwest was just as cold as–if not colder– than Antarctica.

In many states, the temperatures was in the -30-40°F, but with windchill it was in the -50’s°F. Officials advised people to stay indoors; hypothermia could set in in as little as six minutes.

School and businesses were closed, many experienced power failures, and air traffic was shut down. Major cities setup warming centers; utilizing bus stops, community centers and churches to provide some shelter from the cold.

At least 21 deaths have been attributed to the extreme cold, and hospitals report treating dozens for frostbite.

Even the warming temperatures after the cold snap have the potential to cause issues. Flooding, water pipe damage and clogged drains could happen after the extreme freezing and
thawing.

The polar vortex, a mass of swirling air over the Arctic, is the cause behind this cold spell. The vortex expands in the winter, dipping down further into the Northern Hemisphere. The cold drifts of air from the larger vortex are transported south by the polar jet stream. Blasts of cold air like the one in the U.S. midwest happen when the vortex becomes unstable because of warmer Arctic temperatures.

Previous Arming Teachers In Schools
Next Breaking the System