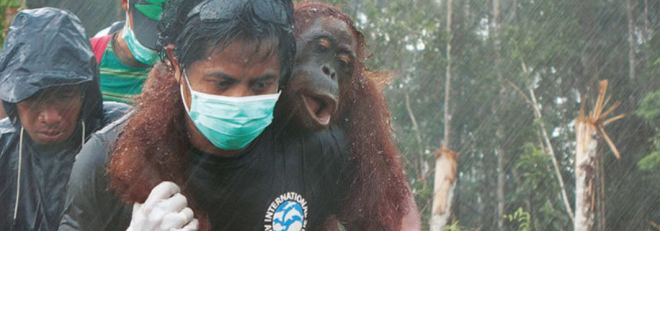 Coco-Nuts: The Insanity of the Palm Oil Industry

If I told you that you are funding the extinction of orangutans, you would probably tell me that I am out of my mind. However, if you take a look in your pantry, you are likely to find palm oil sitting in one form or another on your shelf.  Palm oil trees are native to Africa. But because of a high demand for palm oil worldwide, farmers have used alarming methods to make a profit. The corrupt governments of Indonesia and Malaysia do not regulate farmers, so 90% of palm oil is produced in these countries.  It is common practice in this industry to burn down rainforests so that palm oil trees can be planted in their place. As of 2015, palm oil farming alone had destroyed over 3.5 million hectares of rainforest, but that number has dramatically increased since. Many of the species that reside in these havens of biodiversity are found nowhere else in the world.  Elephants, Asian rhinos, tigers, orangutans, this industry decimates the habitat of these endangered species and hundreds, if not thousands of these creatures are burned alive or killed by machinery each year. Orangutans are incredibly human-like in their expressions and mannerisms, and yet they are considered pests by palm oil farmers. Roughly 50 orangutans are killed each week because of deforestation.  It is estimated that deforestation causes 20% of global warming. In his article for The Guardian, George Monbiot defined palm oil plantations as “the greatest environmental disaster of the 21st century.” The slash-and-burn techniques of clearing the existing rainforest result in apocalyptic consequences. In 2015, palm oil deforestation techniques resulted in a toxic cloud that enveloped most of Southeast Asia for roughly two months, severely affecting the health of millions of people and even killing 10.  Clearly, the ruthless methods of the palm oil industry completely disregard not only environmental and endangered species issues, but human rights concerns as well. The REPSA palm oil company spilled toxic waste into the Pasion River of Guatemala in 2015, causing a catastrophic food crisis for a local Mayan community. When these people fought back, one indigenous environmentalist was murdered, and three more protesters were kidnapped.

The worldwide market for palm oil is very good, mostly because it is cheap, versatile, and increases product shelf life.  And most consumers do not even know that they are using it. Palm oil is often used in ice cream, bread, and many other items, as well as cleaning products and cosmetics like makeup and soap.  It is estimated that roughly 50% of all packaged products contain palm oil. Those Girl Scout cookies you have in your freezer? Palm oil. Those Cheez-Its you’re snacking on right now? Nutella? Dr. Pepper? Palm oil! To make the problem even more impossible, the ingredient hides behind more than 200 different pseudonyms, the most infuriating of which being “vegetable oil.”  These aliases are often used to market an item as healthy, and appeal to vegetarian or vegan consumers. But palm oil is not exactly a healthy food. Sure, it is low in trans fat, but processed palm oil is very high in saturated fats and calories, and can lead to organ toxicity, increased risk of heart disease, insulin resistance and obesity. On top of that, the product is usually found in processed foods, so clearly this ingredient is no friend of your body.

But this is crazy.  Surely someone has done something to stop this insanity, right? Wrong. Despite the protests of passionate civilians worldwide, most governments and major corporations remain silent about this issue.  Lobbying and other financial interests run deep, and as of now, no one in power is doing much to stop this cataclysmic industry’s practices! If the United States alone put restrictions on palm oil, the industry would be forced to make dramatic changes in the way its product is procured.  However, the current Trump administration is making no attempts to solve this issue, which means that the responsibility falls upon ordinary citizens. And there are things we can do. A consumer boycott of all goods containing palm oil is clearly the only way that civilians can stop this madness and protect our world for future generations.  If you were around in the 70’s and 80s, you remember how the people prevented a hole in the ozone layer from growing by boycotting aerosol containers in protest of their harmful chemicals. We must call for government action in the same way. So avoid buying products that use palm oil, and look for a label that confirms that the food was grown a rainforest-friendly way.  Many brand names such as Safeway, Nestlé, and Kellogg’s, and L’Oréal have pledged to use only responsibly sourced palm oil. Besides, you don’t have to go completely cold turkey. If everyone simply halved their palm oil consumption, the industry would get the message and be forced to change their practices. It comes down to whether we want to take a few extra minutes now to research the products we buy, or to pay in our lives later on.  Because the effects of deforestation and climate change are already killing us, and we do not have much time left to solve this issue.