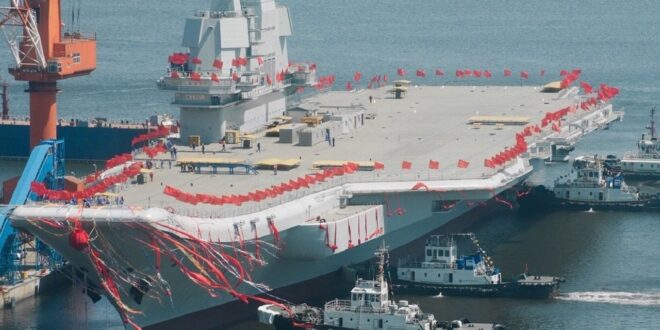 China has launched its third aircraft carrier on Friday, named the Fujian, after the Chinese province opposite to self-ruled island of Taiwan, which has been interpreted as a statement of intent to Taiwan and U.S. allies as it continues to expand its military.

President Xi Jinping has made overhauling the Chinese military, currently the largest in the world, a core part of his policy, seeking to project Chinese military power beyond its shores, though China has claimed it has no hostile intent.

The launching ceremony of the Fujian saw colorful ribbons, water cannons, smoke, and champagne being deployed, and an official naming at the Jiangnan shipyard in Shanghai, as shown on state media.

Navy personnel lined up in front of the ship and sang the national anthem, which was attended by multiple senior military officials, including Xu Qiliang, vice chairman of the Central Military Commission.

The new aircraft carrier includes a full-length flight deck with a catapult launch system, according to state media.

The Fujian joins two other aircraft carriers in the Chinese navy, the Shandong, commissioned in late 2019, and the Liaoning, the hull of which China purchased from Ukraine in 1998 and modified domestically.

However, China has little experience in operating and integrating aircraft carriers within naval task forces, which the U.S. has been doing since World War II.

Only the U.S., with 11 aircraft carriers, has more of the vessels than China.

The launch of the Fujian demonstrates the Chinese military’s increasing capability and strength at a time of heightened tensions with Taiwan and the United States.

The coastal province of Fujian is just across the Taiwan Strait from Taiwan and is home to the People’s Liberation Army Eastern Theater Command.