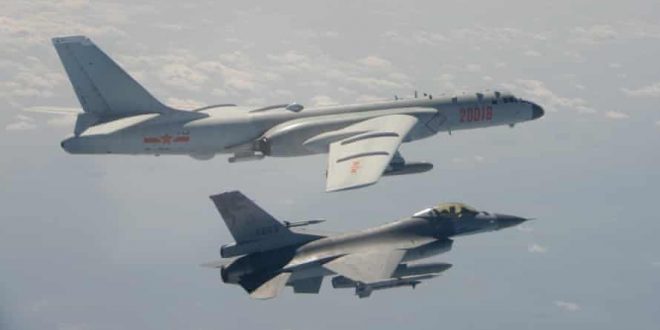 The Chinese military flew sixteen jet aircraft over waters South of Taiwan on Sunday. The United States has expressed its concern about what it has called “provocative military action” on the part of China near the self-governed island that has long been claimed by China.

China sent 38 aircraft over Taiwanese waters on Friday and 39 on Saturday, which is the most that has been reported by the Taiwanese government in a single day since September 2020. The flights were conducted during both daytime and nighttime, and it was unknown if China was planning another flight for Sunday night.

The planes were identified as being mostly comprised of J-17 and SU-30 fighter jets.

A statement from Ned Price, spokesperson for the U.S. State Department warned China to cease its military activity near Taiwan due to risks of possible miscalculation and undermining of regional peace and stability.

It added that the U.S., Taiwan’s largest arms supplier, would continue to help the government foster its defence force.

China has been continually sending military aircraft into the area south of Taiwan frequently for more than a year. Taiwan’s Defense Ministry reports that 12 fighter jets and four other Chinese military planes entered the Taiwanese air defense identification zone on Sunday.

The fighter jets sent by China on Friday were interpreted to be a show of force on China’s national day on October 1st, the 72nd anniversary of the official founding of the People’s Republic of China.

These flights also came during the same week that Beijing accused Britain of sailing a warship into the Strait of Taiwan with “evil intentions”.

These flights serve to highlight the ever-increasing tension between China and the West.