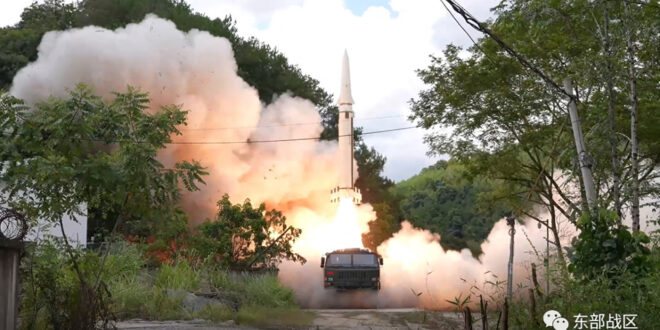 The Rocket Force under the Eastern Theatre Command of China's People's Liberation Army (PLA) conducts conventional missile tests into the waters off the eastern coast of Taiwan, from an undisclosed location in this handout released on August 4, 2022. Eastern Theatre Command/Handout via REUTERS ATTENTION EDITORS - THIS IMAGE WAS PROVIDED BY A THIRD PARTY. MANDATORY CREDIT. NO RESALES. NO ARCHIVES.

China has conducted what have been described as “precision missile strikes” Thursday in waters off of Taiwan’s coasts as part of military exercises that have raised tensions in the region to their highest level in decades following a visit by U.S. House Speaker Nancy Pelosi.

China had announced earlier that the military exercises were underway, with its navy, air force, and other branches of its military participating. The exercises spanned six zones surrounding Taiwan, which Beijing claims as its own territory and has expressed its willingness to annex it by force if necessary.

Five of the missiles that were launched by China landed in Japan’s Exclusive Economic Zone off Hateruma, an island located a significant distance south of the main islands, according to Nobuo Kishi, Japanese Defense Minister. He said Japan had protested the missile launches to China as “serious threats to Japan’s national security and the safety of the Japanese people”/

Japan’s Defense Ministry also had speculated that four missiles flew over the Taiwanese island, possibly directly over the capital city of Taipei, according to a statement its embassy in Washington, D.C. posted on Twitter. Taiwan’s Defense Ministry instead did not deny the claim, but said that the flight path was “outside the atmosphere and is not harmful to the vast area on the ground it flies over.”

The drills were prompted by a visit to Taiwan this week by U.S. House Speaker Pelosi and are intended to express China’s displeasure over the visit and as a reminder of its claims over the self-governing island. Along with moves to diplomatically isolate Taiwan, China has also long threatened military action over moves by the island to secure its de-facto independence with help from western allies such as the U.S.

The missile launch was broadcast on state network CCTV. According to the Eastern Theater Command of the People’s Liberation Army, long-range explosive projectiles were fired, and “all missiles hit the target accurately”.