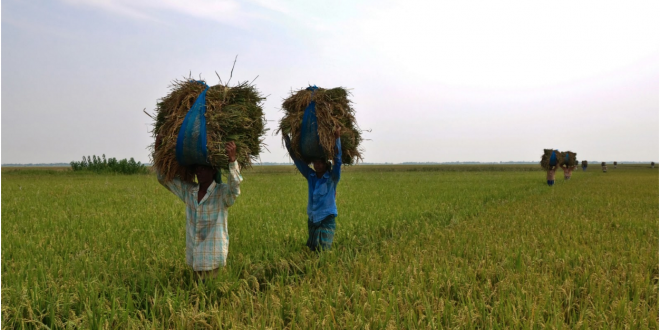 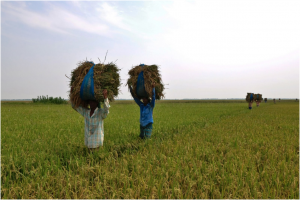 Sharp increases of carbon dioxide in the atmosphere have already caused big problems for humanity and are projected wreak worse havok: higher than normal temperatures, fluctuating weather patterns, dying ocean animals and their environment. But hey, at least an abundance of carbon dioxide is good for the plants, right? And the better plants, the better the agriculture, which, in turn, would benefit the agenda of humans. Picture all the glorious fields of crisp, sweet corn and beautiful golden wheat, and orchards heavy with delightfully tart oranges and cherries. Unfortunately, the answer is more complicated than that.

To some extent, higher carbon levels might be beneficial. More carbon dioxide would speed up photosynthesis and create a faster yield rate. Not only that, but more carbon dioxide would decrease the water lost through transpiration, a process in plants that release water vapor. However, this does not happen in all plants. In a study, increased temperatures and drier conditions that come with rising carbon dioxide levels at first left the crops doing poorly with lower yields. However, once carbon dioxide levels were doubled, crop yields grew significantly. Unfortunately, this experiment has a crater-sized caveat that could undermine all the good news. This experiment was done indoors in a controlled environment at NASA and it is missing one big factor: irregular weather patterns. Early warm temperatures dotted with cold snaps would destroy the tender buds of many fruits and vegetables. Heavy rains and flooding would destroy whole crops at a time. So, while higher carbon dioxide levels might theoretically yield more crops, all the other consequences of global warming would destroy all the ‘would-be’ crops.

Another factor that would erode the joys of higher crop yields is that the nutrients of the aforementioned crops would be, in most cases, much lower, which would put more people at a higher risk of malnutrition. The predicted decrease of protein content in crops, for example, would put an addition of about 150 million people at risk of protein deficiency, causing low birth rates, stunted growth, and other growth deficiencies. Another nutrient that would be expected to be lower is iron. Iron deficiencies can cause a whole variety problems, especially for people who already have limited access to green leafy plants. Iron deficiencies can cause anemia, impair growth, and lower children’s IQs.

Cindy is senior at Henry M. Gunn High School and is incredibly honored to be a part of the Rising Star Magazine team. She enjoys belting out Disney songs, playing piano, watching Chinese dramas, and babysitting. Cindy serves as California DECA's VP of Silicon Valley and is also the singing teacher at FCSN and the President of HEARTS Nonprofit. She can be contacted at cindy@risingstarmagazine.com
Previous Computer Illness
Next The Stereotypical Internet Cafe in China