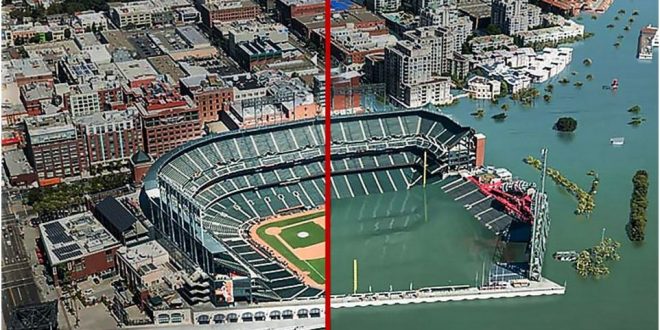 On Wednesday, April 26, 2017, the California Ocean Protection Council released a report named “Rising Seas in California: An Update on Sea-level Rise Science”. The report warned that climate change could cause ocean waters to rise far higher than previously anticipated―an increase in sea level by as much as 10 feet by the end of the century.

This worst-case scenario predicted that water would rise in the coming decades some 30 times faster than in the last century, destroying airports in Oakland and San Francisco and swamping roadways, low-lying bridges, railroad tracks, farmland, beaches, and some towns. As many as 42,000 homes would be completely submerged.

The report also stated that in the best-case scenario if fossil-fuel emissions are significantly curbed, levels in the San Francisco Bay Area would still increase up to 2.4 feet. Even that could be devastating to property, infrastructure, and the economy.

The Ocean Protection Council report increased its previous estimates from four year ago because ice sheets in the Antarctic and Greenland are melting at an increasingly rapid pace. In addition, global warming effects are already being seen and new discoveries have added to scientific knowledge about what is happening.

Despite California’s tough anti-pollution measures, its 1,100-mile coastline is extremely vulnerable to climate change. Researchers now believe the reason that Antarctic ice runoff hit the West Coast particularly hard is due to the Earth’s rotation and gravitational pull on ocean waters. “For every foot of global sea-level rise caused by the loss of ice on West Antarctica, sea-level will rise approximately 1.25 feet along the California coast,” states the report.

Roger is a junior at Carlmont High School in Belmont, California. Roger serves as an officer of Help Everyone and Remember to Share (HEARTS) non-profit. Roger founded the first California Business Professionals Association (BPA) club at his high school and is active in other STEM related clubs. Outside of his busy school schedule, Roger practices karate, plays saxophone, reads, and volunteers for several worthy social causes in the US and China. Roger is extremely honored to serve as the News Column editor for the Rising Star Magazine.
Previous Internet Piracy
Next Sending Civilians to Mars