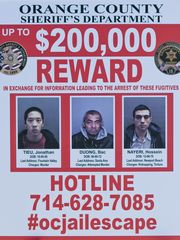 On January 22, these three dangerous inmates were discovered to be missing at a maximum security jail in Santa Ana after a 9 o’clock PM head count. They broke out of the jail sometime in between the 5 o’clock morning headcount and 9, leaving a period of 15 hours where they could have escaped. The inmates used tools to cut through security bars, plumbing tools, and air vents to get onto the roof, then tied together sheets and towels to rappel down the 50-feet-high building.

Previous Dream: A step-by-step plan
Next The Force Awakens Review