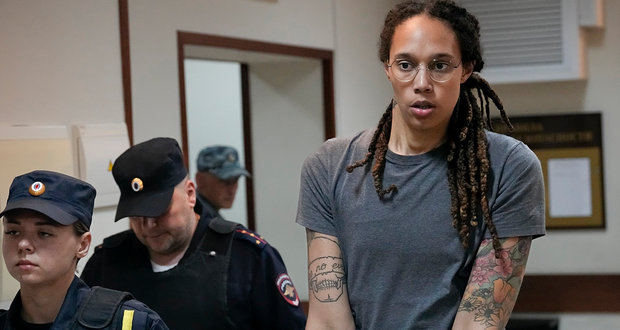 The WNBA star had been held for months in Russian prisons on drug charges and was released on Thursday in a one-for-one prisoner swap for Viktor Bout, a notorious international arms dealer, bringing to an end an ordeal that sparked intense negotiations between the U.S. and Russia for months to secure her freedom.

Following standard procedure for freed U.S. prisoners, Griner was immediately expected to undergo a medical evaluation. President Biden announced Griner’s impending return Thursday morning in a White House press conference, stating: “She’s safe. She’s on a plane. She’s on her way home… After months of being unjustly detained in Russia, held under intolerable circumstances, Brittney will soon be back in the arms of her loved ones and she should have been there all along,” Mr. Biden said. “This is a day we’ve worked toward for a long time. We never stopped pushing for her release.”

The president said he spoke to Griner by phone from the Oval Office, where he was joined by Griner’s wife Cherelle, Vice President Kamala Harris, and Secretary of State Antony Blinken.

“We’ve not forgotten about Paul Whelan… we will never give up on securing his release,” said Mr. Biden.

U.S. officials said negotiations with the Russians stalled when they mentioned bringing back both Americans.