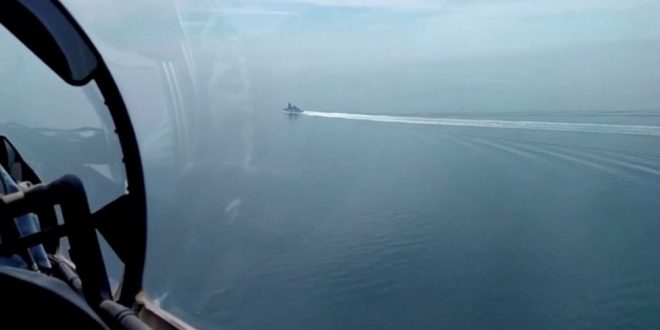 Moscow’s defence ministry said a patrol ship fired warning shots and a jet dropped bombs in the path of HMS Defender as it sailed some 12 miles (19km) off Crimea’s coast. The UK government rejected Russia’s account of the incident and denied that any warning shots had been fired. A BBC correspondent on the warship said it was harassed by Russia’s military.

Aircraft could be heard flying overhead as BBC defence correspondent Jonathan Beale filed a report from the deck of the HMS Defender in the Black Sea as it sailed to Georgia. He described hostile warnings over the radio as the warship’s crew prepared for a possible confrontation.

Beale, who had been invited onto the ship before the incident occurred, said he saw more than 20 aircraft overhead and two Russian coast guard boats which at times approached at less than 100m away.

This conflicts with statements from both the British prime minister’s office and defence ministry, which denied any confrontation.

HMS Defender was sailing from Odessa in southern Ukraine to Georgia. To get there, it passed south of the Crimea peninsula, which Russia annexed from Ukraine in 2014 in a move that has been strongly rebuked by NATO and its allies.

While Moscow claims the peninsula and its waters are Russian territory, the UK says HMS Defender was passing through Ukrainian waters in a commonly used and internationally recognised transit route.

A source told news correspondents that the Defender was not there to pick a fight but to make a point – to assert its right to freedom of navigation in international waters.

However, Russia’s defence ministry said the “dangerous actions” of the navy ship entering its waters were a “gross violation” of the UN Convention’s sea laws, and called for the crew to be investigated.