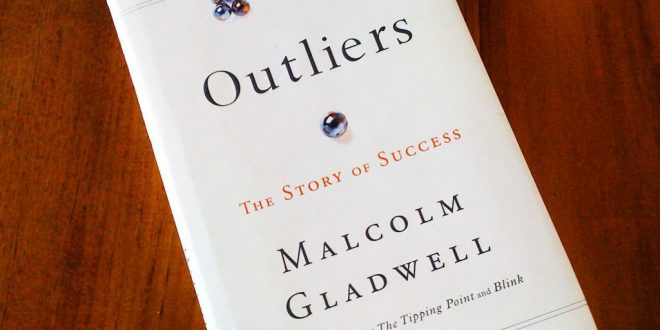 Outliers by Malcolm Gladwell takes a closer look at the “outliers” of society, whether it be similarities of the best hockey players, how the Beatles rose to success, or how being Jewish at a time when Jews were discriminated against turned out to be an advantage for Joe Flom. Through examining cases such as the ones listed above, Gladwell comes to the conclusion that success largely depends on uncontrollable circumstances rather than hard work alone. The beauty of the book is that its message can resonate with anyone as long as one is interested in looking at the bigger picture and seeing why and how people’s lives turn out the way they do. For me personally, a current senior in high school who read Outliers the summer before my senior year, this book does not specifically discuss the nuances of the college application process but rather  tackles many insecurities and worries that everyone involved in it has. The book’s overarching message that there are many external factors that affect our chances of attaining success offered me a word of comfort as a stressed student toiling to present my best self to colleges. In addition to compelling analysis, the book reminds us that even the most brilliant people could not have achieved success without an element of good fortune. With that said, let’s get into the meat of the book.

The book’s chapters each cover unique stories about completely different people or groups of people whose lives reveal different ways that uncontrollable aspects of life gave them an advantage. One noteworthy example is that an overwhelming number of professional hockey players are born in the first half of the year—this is because the cutoff for age-class hockey is January 1 in Canada for hockey. This means that a child who turns ten on January 2nd can play with one who turns ten at the end of the year. In preadolescence, these month long gaps means significant differences in physical maturity. Because Canadian coaches start recruiting players for the all-star team at age nine or ten, they are more likely to view the players born earlier in the year as more talented, since those players have had the extra months to mature, grow bigger, and become more well-coordinated. From there, the majority of younger players are completely closed off from the opportunities that the chosen have access to, including having better coaching and teammates, playing many more games, and practicing two or three times more often than those in the “house” league. While this does not occur in all sports, the skewed birth-date distribution can be seen in American baseball and European football, which are organized like Canadian hockey. As such, even an arbitrary rule can have such long term impacts and affect the futures of many people.

This is not to say that all hard work is meaningless—according to Gladwell, to become an expert at something, one must put in at least 10,000 hours of work. Even so, as Gladwell mentions, different opportunities that are open to people allow them to achieve their 10,000 hours much faster than everyone else. This applies to Bill Gates and the Beatles—Bill Gates had constant access to a computer during the mid 1900s when computers were rare, allowing him to become an expert programmer at a very young age. Similarly, the Beatles made connections that by chance set them up to play eight hours a day at clubs in Hamburg, Germany. By the time they started blowing up in popularity in 1963, they had performed around 1,200 times.

If these examples intrigued you, give Outliers a chance as it delves into cases like these as well as many others in great depth.

Megan is a senior at The Harker School. She is interested in applied mathematics, computer algorithms, artificial intelligence, cognitive vision science, and economics. Outside of school, she is a tutor and mentor at the Boys and Girls Club of the Peninsula (BGCP), a regular volunteer at Second Harvest Food Bank (SHFB), classical pianist, and an avid figure skater. In her free time, she enjoys exploring hiking trails in the Bay Area and Lake Tahoe, reading science fiction books, WIRED and The New Yorker magazines.
Previous Build the Wall?
Next The Largest Cash Acquisition in China’s Internet History