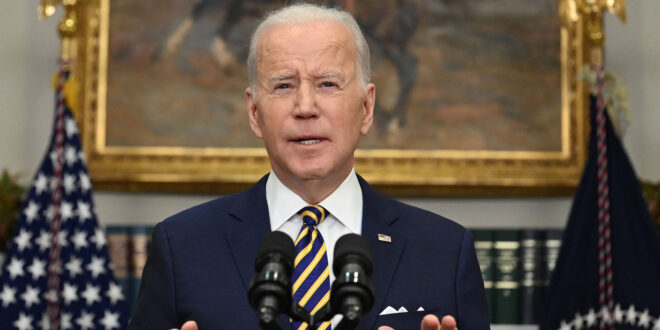 US President Joe Biden announces a ban on US imports of Russian oil and gas, March 8, 2022, from the Roosevelt Room of the White House in Washington, DC. - The announcement tightens unprecedented economic sanctions punishing Moscow over its invasion of Ukraine. The ban is partly a response to strong bipartisan pressure from Congress, despite the impact the announcement is likely to have on already soaring domestic gas prices. (Photo by Jim WATSON / AFP) (Photo by JIM WATSON/AFP via Getty Images)

President Biden announced on Tuesday a U.S. ban on imports of Russian oil and gas over the Russian invasion of Ukraine.

“Today, I am announcing that the United States is targeting the main artery of Russia’s economy. We’re banning all imports of Russian oil and gas energy. That means Russian oil will no longer be accepted in U.S. ports, and the American people will deal another powerful blow to Putin’s war machine”, Biden said.

The ban also targets Russian coal, and has caused gas prices to reach all-time highs, despite government efforts to tap into oil reserves and increase supply.

President Biden said that the decision was made and decided among American allies and partners, but acknowledged that some countries “may not be in a position to join us.”

The United Kingdom has said that it would begin to phase out Russian oil and gas products, and aims to completely eliminate them from its markets by the end of 2022. European Union officials, however, have said that the EU is not expected to join the U.S. and U.K. in banning Russian oil due to its currently high reliance on Russian energy.

As of December 2021, Russian oil made up less than 5% of total U.S. oil imports, meaning that the U.S. was far less dependent on Russian oil than the European Union. However, it was predicted that banning Russian imports of oil and gas would cause a significant increase in the price at home.

“The decision today is not without cost here at home,” Biden said. “Putin’s war is already hurting Americans at the gas pump. Since Putin began his military buildup on Ukrainian borders, just since then, the price at the gas pump in America went up 75 cents. And with this action, it’s going to go up further. I’m going to do everything I can to minimize Putin’s price hike here at home.”

Responding to questions about his response to the rising gas prices, the president said he “can’t do much right now” and reiterated that they were “Russia’s fault.”