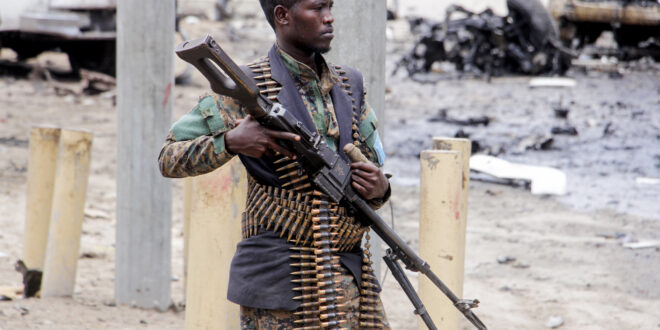 A Somali soldier secures the area after a car bomb attack at a Presidential Palace checkpoint in Mogadishu, Somalia, Saturday Sept. 25, 2021. Police said a vehicle laden with explosives rammed into cars and trucks at a checkpoint leading to the entrance of the Presidential Palace, killing at least eight people. (AP Photo/Farah Abdi Warsameh)

In a decision reversing the actions of his predecessor President Trump, President Biden has approved a Pentagon request to redeploy hundreds of American troops to Somalia for what has been called “a persistent U.S. military presence” for counterterrorism efforts by the National Security Council.

The move will reestablish a flexible military mission in Somalia assisting the country in its fight against al-Shabab, an al-Qaida affiliated terrorist organization with a heavy presence in many parts of the African continent.

The group once ruled over Somalia and has been seeking to regain territorial control over the country. It has carried out overseas terror attacks in Kenya, including in January 2020 in a terrorist assault that killed three Americans.

The Biden administration believes that the move will “enable our partners to conduct a more effective fight against al-Shabab, which is al-Qaida’s largest, wealthiest, and deadliest affiliate and poses a heightened threat to Americans in East Africa,” said Adrienne Watson, spokeswoman for the National Security Council on Monday.

A senior administration official told reporters on Monday that U.S. troop numbers in Somalia would be “under 500” and that they would continue the same mission of training the Somali military and assisting local forces on combating terror. Pentagon spokesman John Kirby emphasized that “our forces are not now nor will they be directly engaged in combat operations.”

The Pentagon has yet to decide when the return of forces will occur, and is in consultation with the Somali government.

In December 2020, near the end of his term, President Trump ordered the withdrawal of the over 700 U.S. troops in Somalia as part of a larger effort to reduce U.S. troop counts in Afghanistan, Iraq, and elsewhere. He had committed to ending what he labeled “forever wars.”