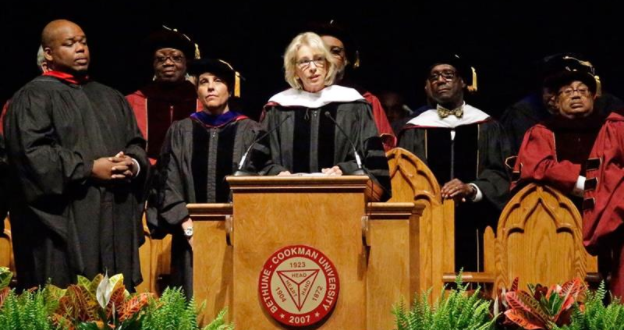 On May 10, the graduating class of Bethune-Cookman University, a historically black institute of higher education, gathered in the auditorium dressed in black gowns and caps. When Betsy DeVos stood at the podium to give her first commencement address as secretary of education, many graduates turned their backs because they refused to face her. Throughout her 20-minute speech, DeVos was greeted with eruptions of boos and chants, especially when she was awarded an honorary doctorate and when she commented that she would visit the home of school founder Mary McLeod Bethune to pay her respects. One demonstrator, sophomore Bobbie Luke, had to be escorted out of the auditorium by security guards.

Towards the beginning of her speech, DeVos implored: “One of the hallmarks of higher education, and of democracy, is the ability to converse with and learn from those with whom we disagree.” This statement incited such an opposing, rowdy crowd that the school President, Edison Jackson, had to interrupt DeVos’ speech to warn the students in an attempt to quiet them. “If this behavior continues, your degrees will be mailed to you,” he stated. Although many took their seats, a few graduates still remained standing in protest.

Since being appointed secretary of education on February 7, DeVos has faced many protesting crowds like the one at Bethune-Cookman. Earlier this year, DeVos was scheduled to visit Jefferson Middle School Academy, a public middle school in Washington, DC. However, protesters crowded the front of the school, and DeVos was physically blocked from entering the school by activists, and forced to turn around while one demonstrator shouted “Go back! Shame! Shame! Shame!” Many people, including the Mayor, thought it was necessary for DeVos to experience the workings of a public school since she, nor any of her children, had ever attended a public school. DeVos was later allowed to go back to the school, and commented that the public school was “awesome”.

Previous Classical Music is Dead… Or Is It?
Next Listening To Music While Studying May Not Be All That Bad