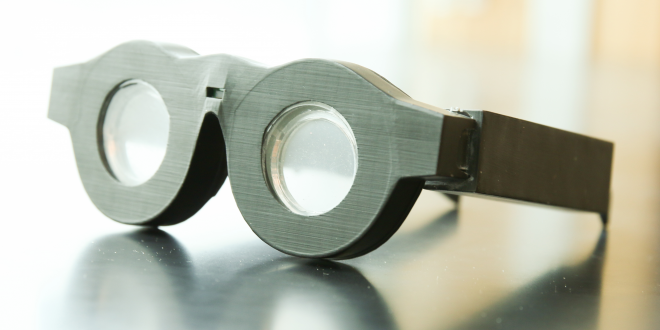 So many kids these days have bad eyesight. Blame it on bad genetics, age or staring at screens 24/7 in the new tech filled world—it doesn’t matter. A lot of us rely on glasses. And once we’re older, the lens in our eyes stiffen, which means your eyes aren’t as “flexible” as it was when you were younger. Objects in close range will start to look blurry as well. On top of normal vision problems, this means that lots of middle aged adults need another set of glasses, which is inconvenient.

Normal prescription glasses don’t fix the eye’s problems, but simply shift the range of what’s in focus instead of expanding it. Putting on reading glasses for people with bad eyesight will allow close range objects to be in focus, but objects in the distance will be blurry. And vice versa for people who need glasses for seeing far distances.

But, the days of constantly changing glasses may change forever. In the University of Utah, researchers have developed smart glasses with liquid lenses that automatically adjust their focus, depending on what you want. With these glasses on, objects in front of the person will be clear no matter how far away it is.

The new glasses consist of lenses made of a thick, clear liquid, enclosed in flexible membranes. The membranes move back and forth, changing the curvature of the lens. The bridge of the glasses measures the distance to near objects using infrared light. The bridge then sends a signal to the lens to adjust the curve. The adjustments happen very quickly, allowing focus in 14 milliseconds. This means that as a person’s prescription changes, the lenses also compensate, eliminating the need for new glasses.

Unfortunately for us, there have been no formal tests, and the current prototype is bulky, and to completely honest, ugly. Hopefully, these issues are addressed by the time this technology reaches the shelves.

Previous Doing What You Love
Next Space and our Bodies: Isolation