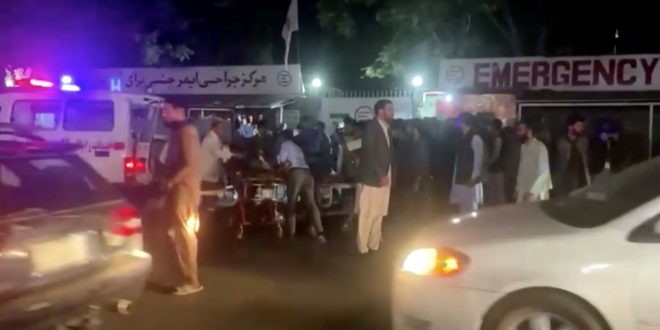 A screen grab shows people outside a hospital after an attack at Kabul airport, in Kabul, Afghanistan August 26, 2021. REUTERS TV/via REUTERS

Bombings and gunfire caused by a terrorist group around Hamid Karzai International Airport in Kabul killed 13 American service members and left a scene of violence and chaos amongst the civilians and U.S. and allied forces that were scrambling to evacuate.

The 13 U.S. service members killed in the attack were comprised of 11 marines, a navy corpsman, and another service member whose service branch was not immediately clear. U.S. officials claim that ISIS-K, an offshoot of the Islamic State terror group, was responsible for the attack. It was one of the deadliest days for America in its nearly 20-year war in Afghanistan.

“It’s been a tough day,” a solemn President Joe Biden said at the White House. He paid his respects to the deceased soldiers, whom he called “heroes who were engaged in the dangerous, selfless mission to save the lives of others.”

Biden said that the evacuation effort would still be underway and vowed retribution against ISIS-K. “Know this, we will not forgive. We will not forget. We will hunt you down and make you pay.” He said.

One of the explosions was triggered by a suicide bomber at an entrance security check near a gate allowing entrance to the airfield. The second explosion occurred at a hotel where Afghans and British and American personnel were preparing their departure.

U.S. officials, including Biden, had warned for days about the threats posed by ISIS-K, a so-called “enemy” of the Taliban, in the chaos following the collapse of the Afghan government. Since the fall of Kabul to Taliban forces, ISIS-K has been carrying out terrorist attacks on civilians. Marine Corps General Kenneth McKenzie, commander of U.S. Central Command, has warned that more attacks following this one are possible.

“The threat from ISIS-K is extremely real”, McKenzie said. He and other top military officials warning forces on the ground of possible attacks for several days, saying that threats are “imminent” and can take a wide variety of forms, from rocket attacks to car bombs.

The attack came 5 days before the August 31st deadline that Biden had set for withdrawing all U.S. troops.