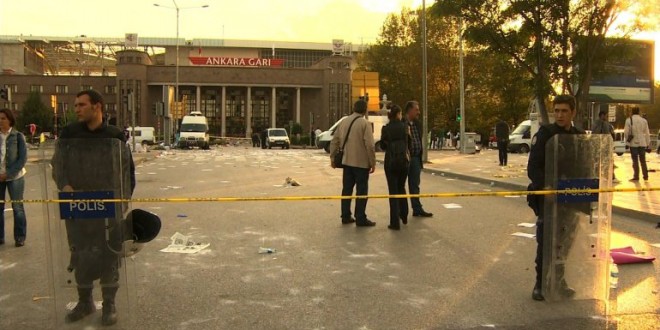 Two powerful bombs exploded near the main train station in Ankara on Saturday morning, targeting a peace rally and causing carnarge, killing at least 86 people and injuring 186 others in the deadliest attack in the Turkish capital in recent memory.

At Least 95 Dead in Turkey Bombings

Two powerful bombs exploded at a peace rally near the main train station in Ankara on Saturday, October 10, 2015 at around 10:00 am. The deadly attack in Turkey’s capital killed at least 97 people and wounded 246 others.

The bombs went off during a peace march involving many groups of people, including pro-Kurdish HDP, or People’s Democratic Party. Most of the victims were taking part in a lunchtime demonstration that called for an end to the renewed conflict between the Kurdistan Workers’ Party (PKK) and the Turkish government. About 14,000 people were in the area. According to Turkish Prime Minister Ahmet Davutoglu in a televised address to the nation, two suicide bombers are believed to have caused the blasts. There will be further investigation of the attacks, for which no group has claimed responsibility.

Previous Should Abortion be Legal?
Next Drinking Soda