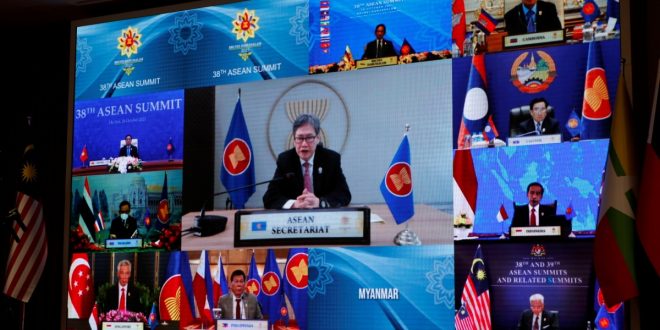 Southeast Asian leaders began their ASEAN summit on Tuesday, with Myanmar refusing to send any representatives after being angered by a collective decision by the bloc to exclude the country’s junta leader.

The virtual gathering kicked off three days of meetings hosted by ASEAN, with President Joe Biden and Chinese and Russian leaders scheduled to attend.

Myanmar was at the forefront of issues on the agenda for Tuesday’s talks between regional leaders, and the country remains in chaos following the coup by the military in February and the subsequent crackdowns and government violence against opposition.

Under international pressure to defuse the situation in Myanmar, ASEAN has drafted a plan aimed at restoring peace, but there are widespread doubts that the military junta in Myanmar would be unwilling to go along with the plan.

Its refusal to allow a special envoy to meet with ousted former president Aung San Suu Kyi prompted the ASEAN bloc to exclude Min Aung Hlaing, the junta leader, from the summit.

The coup ended Myanmar’s short democratic experiment, and Nobel laureate and civilian leader Suu Kyi now facing multiple charges in a junta court that could result in her being jailed for years or even decades.

Min Aung Hlaing’s exclusion from the summit was an unprecedented rebuff from an organization that has been frequently criticized as impotent, and the junta has slammed the motion as a breach of the bloc’s non-interference policy regarding the domestic affairs of member states.

The bloc invited Chan Aye, director-general of the junta’s foreign affairs ministry, to attend in Min Aung Hlaing’s place, but the junta has declined.

Sending a more junior figure could “affect our country’s sovereignty and image”, a junta spokesman said on Monday, and the country did not send a representative.