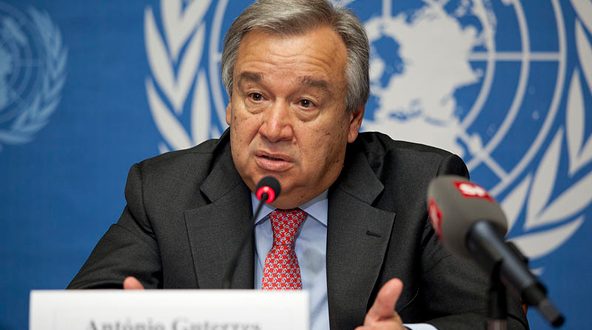 The UN chief recently stated that the world is facing five major obstacles in the present, and all countries must cooperate and enter an emergency mode as their actions will determine the future of the world for decades.

The world has been facing a pandemic for almost two years. Now, Guterres states that all countries must enter an emergency mode and tackle the spread of this virus as fast as possible. However, he warns countries that this global problem should not be used to undermine human rights and freedom, or used as an excuse to impose unfair restrictions. He adds that governments and leaders should act based on science and common sense; seeing the vast improvements in the development of vaccines that have been proven to help stop the spread and decrease mortality rates, Guterres is in favor of the use of vaccines and highlights the importance of stopping misinformation in the media. Nevertheless, we must also work towards vaccine equity, since many countries and marginalized communities do not have equal access to vaccines.

Guterres said that the new pandemic emphasized the inadequacy of the current global financial system—making the rich richer and the poor poorer. One of the biggest problems, he says, is that developing countries are struggling to grow their economy or are denied debt relief. The current financial system is also affecting low-income women and girls the most, since they are paying high prices in lost healthcare, education, and jobs.

Guterres affirms that increased emigration, inequality, and crisis are a product of our financial system. One of the solutions he is pushing forwards is the redirection of the Special Drawing Rights, which is a reserve asset for countries that need it the most.

For Guterres, no country has any other option but to enter an emergency mode to fight the current climate crisis. We have to reduce our emissions by 45% to reach carbon neutrality by the end of the decade, and the actions taken this year will be monumental towards achieving the goals of the Paris Agreement.

All major emitters in the world must take more action and faster, and coalitions will be created to help the nations that are struggling to transition to sustainable energies and reduce their emissions. The UN chief also emphasizes the importance that countries strengthen Nationally Determined Contributions (NDCs)—their climate action plans—until they can achieve their sustainability goals.

Alarm 4: Controlling the use of technology and the internet

It is important to note that although improvements in technology have been miraculous, internet access is far from being equal and we must increase our education in how to protect our data, avoid misinformation, and prevent cyber attacks. Therefore, Guterres advocates for imposing regulations on media companies that benefit from promoting addicting behaviors to consumers. Two of his proposals are the Global Digital Compact, a unanimous agreement of governments, the private sector, and civil society to cooperate in the digital world, and the Global Code of Conduct to reduce misinformation.

With violence and crime rates increasing exponentially, peace is a necessary priority for governments in the coming years. To reduce the hotspots of crime globally, Guterres wants the UN Security Council to address some of the challenges that prevent peace. He stresses the importance of establishing areas to promote cooperation and prevent the escalation of local conflicts. It is also important to bring women into the effort, so Guterres wants women to be actively involved in decision-making surrounding peace-making.

Previous Why is Organic Food Better?
Next Tips on Starting to Dance