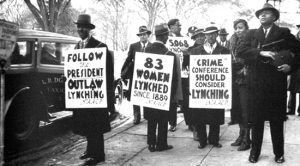 Anti-Lynching Law After 150 Years of Injustice

Since the end of the civil war, a horrifically bloody battle over the disparity in the North and South caused by the polarizing issue of slavery. In 1864, the war was over, but that did not do much to help former slaves, as well as free blacks. They still faced egregious amounts of discrimination and even violence. They were forced into sharecropping, segregated by the Jim Crow laws, and degraded by minstrel shows. The most symbolic of these atrocities, however, was lynching. The process was the epitome of injustice, a reflection of the racist attitudes of the time. A black person would be accused of a crime, usually without proof, and a mob of people would kill them during the night, usually through hanging. This was usually done under the auspices of officers. Ida B. Wells was a black writer who tracked over 500 of these cases, documented them, and reported it to the people. During the 1900s, there were attempts to outlaw these practices and begin to strictly enforce their prevention. These were constantly impeded, and in the end, the proposed bills were never passed, consigned to oblivion. 120 years later, both houses of Congress have passed an anti-lynching bill, the  Emmett Till Antilynching Act. “We are one step closer to finally outlawing this heinous practice and achieving justice for over 4,000 victims of lynching,” said Bobby Rush, a Democrat Representative. Once it is signed into law by the president, lynching will officially become a federal hate crime. This is one step forward for our country, which has been filled with grievances since it is conception, and can only slowly work to resolve and remember what had once passed and commemorate the efforts of those who have worked to remedy it.

Previous How To Communicate With Friends
Next Diversion in Politics