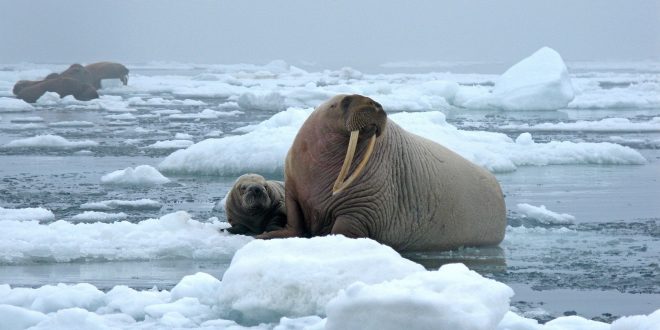 Another Victim to Climate Change: Walruses

Climate change has wrought many changes to the environment. Already, different species have fallen victim to the changes with many becoming endangered and extinct. Humans, too, have felt the effects– the onslaught of hurricanes and dramatically shifting temperatures are hard to miss. Many of these changes can be shielded, and people fail to witness the horrific events occuring in nature. However, Netflix’s Our Planet has recently changed that, and a clip of the documentary has become viral: the video of walruses falling to their deaths from a cliff.

In the water and on ice, their body mass helps them to move gracefully. With their big bodies, it is hard for them to control their movements on land. So, usually, walruses rest on ice. However, the ice is melting with the rising temperatures, so there are fewer places for walruses to rest upon. Increasingly, walruses have developed coastal “haulouts,” places where they can rest on shore.  Usually, they go on to “haulouts” during the warmer months, and even then, it is in small groups. But, of course, with the warmer climate, sea ice is melting rapidly, and more and more walruses are moving onto coastal shores instead, with their increasing numbers pushing them further inland.

Their increasing numbers and movement inland are causing deaths. Young walruses, especially, are dying in the hundreds and thousands by trampling. The deadly consequences of them moving inland are shown in that horrifying video clip. They climb up rocky cliffs, but fall to their deaths when they try to come down. Sometimes, they land on other walruses beneath the cliff, increasing the number of casualties.

Climate change is happening–caused by humans– and animals are suffering because of it. Because of us.

Previous Influence of Bacteria on Autism
Next The Impact of Reading