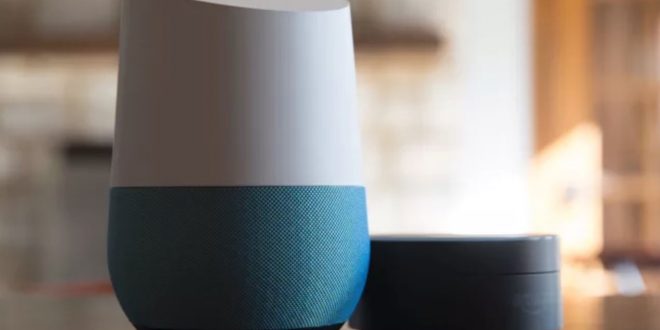 Smart speakers, such as the Google Home and Amazon Echo, are speakers that users can interact with. Smart speakers have programmable voice commands, and each speaker has its own unique functions. These can allow users to control their home environment hands-free. Home settings such as lights or a thermostat can be integrated into the smart speakers, allowing users to say, “Hey Google, change the color of the lights to green,” or “Hey Google, change the temperature to 72 degrees Fahrenheit.” These abilities have brought smart speakers to public popularity.

Amazon released its first smart speaker, Alexa or Echo, on June 23, 2015.  It had quickly become widely known but limited within the United States. Echo only became a global phenomenon when the U.K. and Canada gained access.

After witnessing Echo’s popularity, Google developed a smart speaker of their own to compete against the Echo. Called Google Home, it was released to the US on November 4th, 2016 and the UK on April 4th, 2017. On May 2017, Google announced that the Home will be launched internationally. The Google Home uses many third-party services, which enables users to control music, temperature, lights, and more, all using simple voice commands. The Google Home is best for everyday tasks such as making a to-do list or searching cooking instructions. These functions can be convenient when your hands are occupied.

The Amazon Echo includes even more third-party services. It can order food or even call an Uber. Amazon is slowly adding more and more skills to the Echo’s already impressive repertoire. Compared to the Home, the Echo is much better at integrating with smart home appliances. However, it falls weak to the Home in answering questions, especially complex ones. Questions such as “What were today’s lottery numbers?” cannot be answered by the Echo but can be by the Home. This is mainly because the Google Home is supported by Google’s large search engine, while Echo is not.

The Amazon Echo and the Google Home each have their own strengths and weakness. The Echo is more suited as a smart home controller, while the Google Home is like a more complex Siri. Regardless of ability, smart speakers have become more prevalent in everyday life and no doubt will continue to develop.