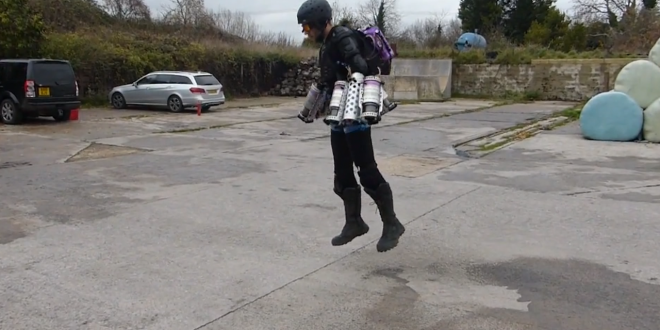 Richard Browning, an inventor and marine reserve, has recently made a flying suit, similar to that of famous superhero Iron Man. He flew his suit for the first time outside the Vancouver Convention Center during a TED event. Browning is fascinated by human flight inspired by his father, who was an aeronautics engineer and an inventor. His suit was named the Daedalus suit by Browning’s 8 year old son. After his maiden flight, Browning has gotten a lot of attention, including millions of views on Youtube and even military attention. To him, however, the project was just a bit of fun, and is unlikely to become a real, mainstream method of transportation.

He created his flying suit using 6 miniature jet engines and a specially made exoskeleton. He also has a custom helmet with a HUD that gives him information on fuel levels.The jet engines on the arms controls the speed and direction of the flight, while the boosters on the back provide most upward thrust. The suit is capable of flying at more than 200 mph and an altitude of more than a thousand feet. However, in his demonstrations, he keeps the suit close to the ground and the speeds low. The suit can fly for about 10 minutes before running out of fuel.

He also founded a startup, called Gravity, that makes technology for the suit. He hopes that eventually, the startup will make a jet suit that will make the current one look like a toy. Currently, jetpacks and human propulsion have no regulations, but looking at the recent huge advances in jetpack technology, there is sure to be a new category for human flight. We’re all very excited to see the direction that the Daedalus suit goes in.

Previous The Journey of Immigrants
Next Sports Injuries