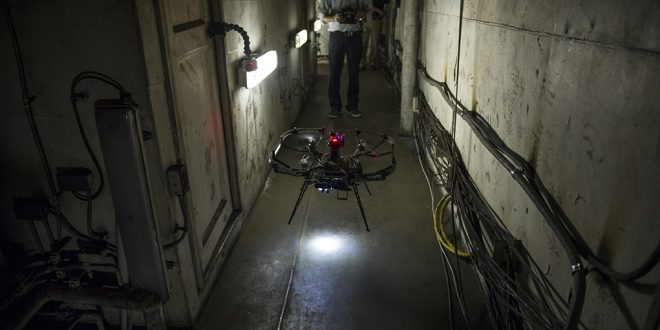 141105-N-PO203-327 MOBILE, Ala. (Nov. 5, 2014) A student-researcher from Carnegie Mellon University remotely maneuvers a quadrotor micro-air vehicle (MAV) through the narrow hallways of the Naval Research Laboratory's ex-USS Shadwell in Mobile, Alabama. In controlled testing, the MAV autonomously flew through a smoke-filled, GPS-denied area to identify a fire’s location and transmit data back to the research team. The Office of Naval Research is sponsoring studies to test MAV capabilities to provide firefighters with information about smoke thickness, fire location and structural damage within the confines of a ship. (U.S. Navy photo by John F. Williams/Released)

Having drones learn to fly themselves can prove very useful. Abhinav Gupta, an assistant professor in Carnegie Mellon University, built a framework where the the drone in question would crash over and over again. The drones were instructed to fly slowly until it collided with something, and then turn around and fly in a new direction. By doing this and sending back data repeatedly, the drone then trained itself to be able to fly successfully all by itself. They subjected the drone to more than 11,000 collisions in 20 different environments.

The algorithm controlling the drones splits the image the drone sees and turn it in the direction that seems less likely to result in a crash. Currently, the only problems the drone runs into are glass doors and plain walls, but those can be fixed later. In the future, where drones carry out tons of different tasks in different environments, this technology can prove useful.