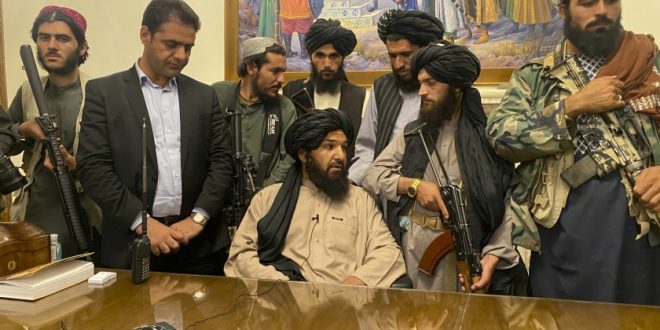 Taliban fighters took control of the capital city Kabul on Sunday, delivering to the militant Islamist organization the prize it has long sought: authority over all of Afghanistan as the Western-backed administration collapsed, President Ashraf Ghani fled, and the long dominant American presence appeared to be coming to an abrupt and chaotic end after nearly 20 years.

The takeover of the sprawling urban center and capital city had been years in the making, but was accomplished by Taliban forces in a single day. Insurgent fighters, fresh off their conquests in each of Afghanistan’s provincial hubs over the previous week, were met with little resistance as they entered the city through its major traffic routes on Sunday morning.

By evening, the Taliban was already giving television interviews in the presidential palace, which President Ghani had departed from just hours earlier. A large and desperate exodus was underway at the airport, where thousands of people clamored to board flights. Additionally, the Pentagon was flying in more U.S. personnel to assist with the evacuation of American troops and servicemen. The American flag was hastily lowered from the Kabul embassy, which is now abandoned.

Footage of rifle-wielding Taliban militants occupying the presidential palace and discarding the Afghan national flag stood as a defining image of a failed 20-year effort by the United States to transform Afghan society at the cost of trillion of dollars and thousands of American lives.

“Decades from now, these images will be invoked as a vivid example of the limits of U.S. power, and of its inability to fight modern wars effectively or to end them on favorable terms,” said Michael Kugelman, an Afghanistan scholar at the Wilson Center.

When asked about comparisons to the evacuation of Saigon in 1975, Secretary of State Antony Blinken said about Afghanistan, “this is manifestly not Saigon.” However, the frantic chaos of the exit did not display the calm and orderly image the administration had hoped for.

Republicans have taken the opportunity to blast the Biden administration for the ineffectiveness of the evacuations, and questions have also arisen around how to U.S. failed to predict the speed of the fall of the Afghan government.

Previous Rocky
Next Blue Galaxy: Aiding the Effort in Stopping the Spread of COVID-19