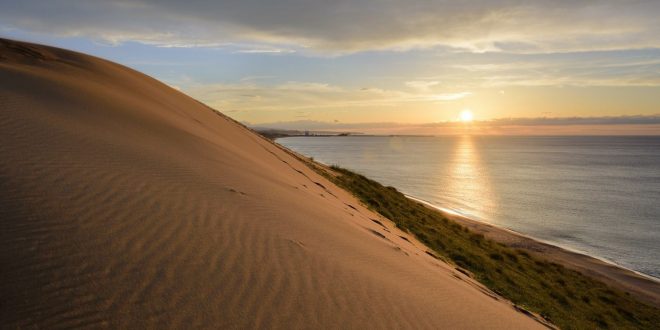 A Desert … in Japan?

Most tourists visiting Japan are probably familiar with the hectic metropolis cities such as Tokyo and Osaka or the traditional old imperial city such as Kyoto or the beautiful landscape such as Mount Fuji. About 73% of Japan is forested and mountainous, and the rest is mostly agricultural farms with the exception of the industrial coastal cities. But in contrast to most of Japan, Tottori Sakyu or Tottori Sand Dunes is a desert in the west coast of Japan. They are only about 30 km2 in size, so they are relatively small compared to the Sahara desert and technically not a desert due to the higher humidity, but they are the largest sand dunes in Japan which are open to the public. The dunes were created about 100,000 years ago by sediment deposits from nearby Chugoku Mountains carried by the Sendai River that flows into the Sea of Japan and by sea currents that redeposit the sand back into the shores. The shape of the dunes are constantly rearranged by the wind. Approximately 2 million tourists, mostly from Japan and Asia, visit this area. But what bring tourists to this site? 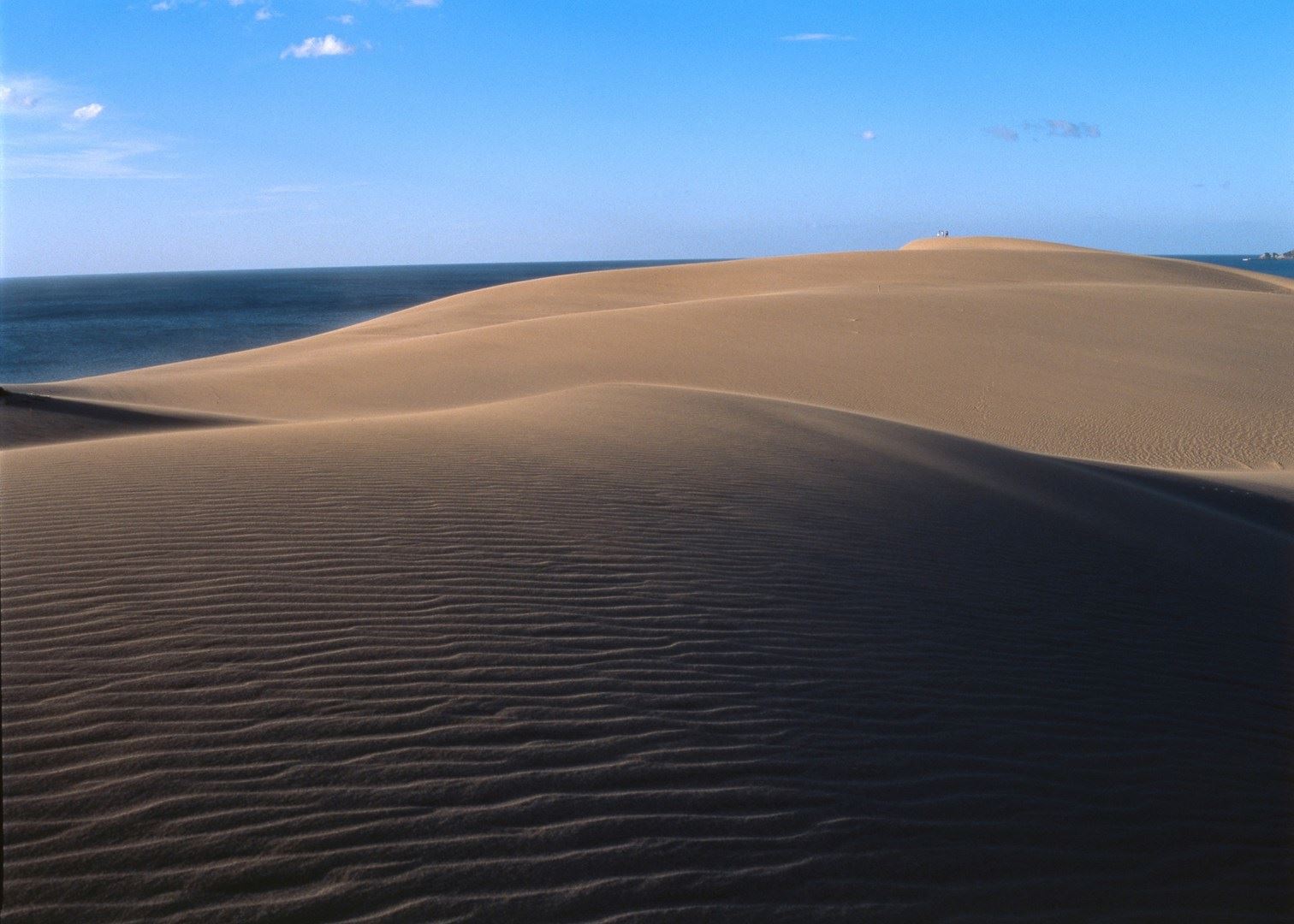 The Tottori Sand Dunes is conveniently accessible with a 20-minute bus ride from Tottori City train station. Besides those who are curious about the off-beaten-path places of Japan, many tourists are captivated by the breathtaking view of the Tottori Sand Dunes with the Chugoku Mountains on one side and the Sea of Japan on the other side. There are also many visitors who find that strolling and sitting around in the sand dunes give them a sense of tranquility and relaxation in contrast to the busy city life. Those with more active lifestyles can do sand surfing (sandboarding) along the steep slope of the dunes that can stretch up to 160-feet into the air or paragliding to get a bird’s eye view of the landscape. And yes, there are camels in this desert though they are not native to this area. Tourists can take either a camel ride or a donkey ride or ride in a horse-driven cart. Those familiar with Japanese literature may gain some insights as to how the Tottori Sand Dunes had inspired Japanese writer Kōbō Abe when he wrote Woman in the Dunes, a story which eventually turned into an Academy Award-nominated film. 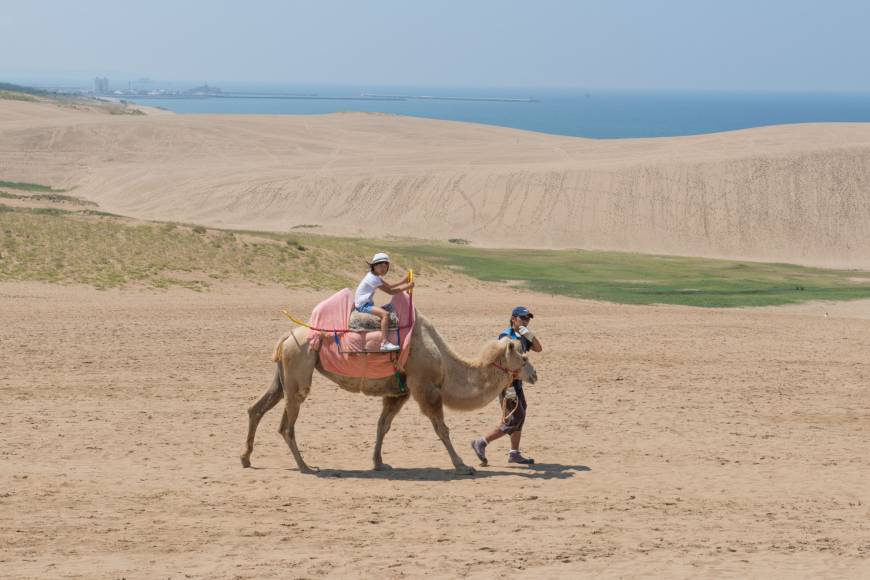 Another reason that brings visitors to this area is the Tottori Sand Museum. The museum is Japan’s only open-air museum which houses one of the most exquisite sand sculptures in the world and opens from mid April to early January. The executive producer of the museum, Katsuhiko Chaen, is regarded as one of 100 most world-respected Japanese individuals. He is a native of Kagoshima who was among the first to be attracted to do sand sculpting in Tottori. His sculptures drew more and more tourists every year, as well as contributions from other sand sculptors from around the world. But sand sculptures are easily destroyed by typhoon so city officials decided to build the museum in 2006 to preserve the sculptures longer. Even then, sand sculptures in the museum degrade over time so once a year the exhibits are replaced with new sculptures. Every year the Sand Museum displays new exhibits with a theme derived from different region of the world. You can view images from previous year exhibits in the museum website, but there is no substitute for experiencing the grandeur and the magnificence of the sand sculptures and seeing the exhibits with your own eyes. 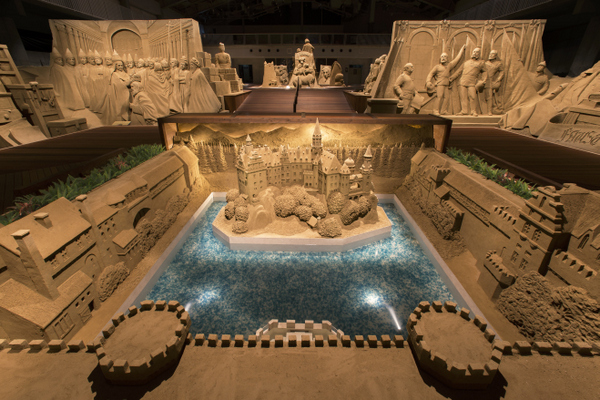 The Tottori prefecture, being the least populated and one of the least visited areas in Japan, is a perfect getaway, especially among those who live in the big cities. Unfortunately the Tottori Sand Dunes is shrinking due to government reforestation which started after World War II and also due to concrete barriers erected to protect the coast from tsunamis, which disrupted the sea currents that bring sand to shore. In 1963, the Japanese government established the Sanin Kaigan National Park in Tottori that includes the Tottori Sand Dunes. Because of significant increases in tourism, the government has taken further measures to stop the shrinkage of the dunes by dumping sand off the shores and removing the encroaching grassy areas surrounding the dunes. It remains to be seen if these measures will be successful. In the meantime, you may want to consider visiting Tottori Sand Dunes to get a different perspective of Japan.

Megan is a senior at The Harker School. She is interested in applied mathematics, computer algorithms, artificial intelligence, cognitive vision science, and economics. Outside of school, she is a tutor and mentor at the Boys and Girls Club of the Peninsula (BGCP), a regular volunteer at Second Harvest Food Bank (SHFB), classical pianist, and an avid figure skater. In her free time, she enjoys exploring hiking trails in the Bay Area and Lake Tahoe, reading science fiction books, WIRED and The New Yorker magazines.
Previous Truth Behind Food Waste
Next The Dark Side of College Rankings