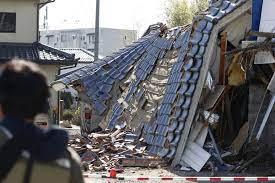 Four people have been confirmed dead and 94 injured after a 7.4 magnitude earthquake hit northeastern Japan, sending shocks through buildings more than 275 kilometers away in the capital Tokyo and leaving hundreds of thousands of Japanese without power.

The earthquake struck off the coast of the Fukushima region and at a depth of 60km just prior to midnight on Wednesday.

Prime Minister Fumio Kishida said that four people had died and that the government would be on high alert for the possibility of more tremors occurring in the following days. The Fire and Disaster Management Agency said on Thursday that of the 94 people that had been injured, 4 were in serious condition.

An earlier tsunami warning for the northeast coast of Japan was lifted and power was restored to all parts of Tokyo by early Thursday morning, though many people elsewhere still remained without power.

Transportation services in the northeast region were also disrupted, with the government indefinitely suspending the Shinkansen bullet train service and at least one major highway to the region being closed.

The Fukushima region was also the epicenter of one of the world’s strongest earthquakes 11 years ago, and the tsunami it caused destroyed the nuclear station at Fukushima and triggered a meltdown, spilling radiation into the surrounding areas.

A fire alarm had been triggered at a turbine building at the crippled Fukushima plant, according to authorities.

A Shinkansen bullet train had also reportedly derailed, though there were no confirmed injuries.

Utility Tokyo Electric Power Company (TEPCO) said that about 2 million households lost power following the quake, including 700,000 in Tokyo and the surrounding region. Tohoku Electric Power, another utility provider, said about 38,500 homes were still without power as of Thursday morning.

Previous How I handle a busy schedule
Next Why Not Inflation? An Undeniable Fact about Monetary Inflation