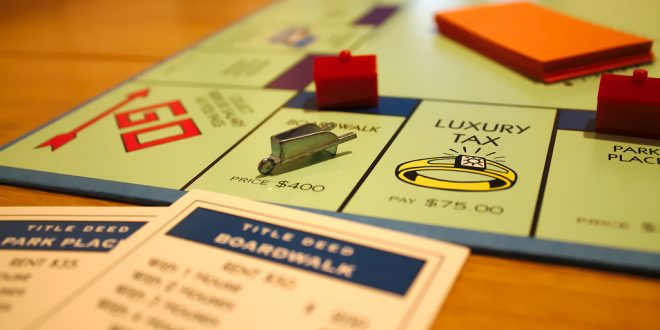 5 Board Games Better Than Monopoly

The first thing that pops into the mind of most people when they hear the words “board game” is probably Monopoly. Monopoly is a classic board game, a game that almost everyone has played yet doesn’t know the rules to. However, in the eyes of board game nerds, Monopoly is perhaps one of the most overrated board games ever. Here are five games that are much better than Monopoly:

The Settlers of Catan is one of the more popular board games among people who haven’t played many games besides Monopoly, but this doesn’t take away from the gameplay. In Settlers of Catan, players take turns rolling dice to gather resources to build roads, settlements, and cities to give them victory points. The player who gets to ten victory points first wins the game.

Dominion is a card game where players have to build a deck and strive for the most efficient way to victory by gaining the most amount of victory points. Each player starts with a small deck of 10 cards. In the center of the table is a set of cards that players can choose to buy, divided into treasures (money), actions, and victory points. Players draw 5 cards each round, and they will keep rotating through their deck as they build it. Players must strategize and create the optimal deck to get more victory points than their opponents.

Pandemic is a cooperative game where your goal is to stop the spread of four virulent diseases across the world and find cures for the diseases before things get out of hand. The game board is a world map that depicts several major cities across the world, with each region represented by a different color corresponding to the color of the disease. On each turn, a player can travel between cities, treat infected cities, discover a cure, or build a research station. One deck of cards is used to give players the ability to cure disease and fly to cities, but it is laced with “Epidemic” cards that intensify the spread of the diseases. The other deck of cards is used to infect cities with diseases. Players can take on different roles with different abilities, and must find ways to work together to cure all four diseases.

Space Alert is a real time, cooperative team survival game. Players become crew members of a small spaceship scanning dangerous sectors of galaxy. The missions last just 10 real-time minutes, and the only task the players have is to protect their ship. During play, the central computer will announce the presence of various threats on one the supplied 10 minute soundtracks that also acts as a game timer. The threats vary from space battleships and interceptors to different interstellar monsters and abominations, asteroids or even intruders and malfunctions on the spaceship. Players have to agree who will take care of which task and coordinate their actions (moving around the ship, firing weapons, distributing energy, using battlebots to deal with intruders, launching guided missiles, etc.) in real time to defend the ship.

Avalon is one of the best party games out there. A game of deceit, Avalon is set in the legendary kingdom of Camelot. Players are dealt allegiance cards at the beginning of the game, and they are either part of King Arthur’s forces of good or hidden as Mordred’s unscrupulous minions among the good. The forces of evil are fewer in number than the forces of good, but they have knowledge of each other and are hidden from all but one of King Arthur’s servants. Merlin knows who the evil minions are, but must only give subtle clues and not reveal himself, or else the evil side will triumph.