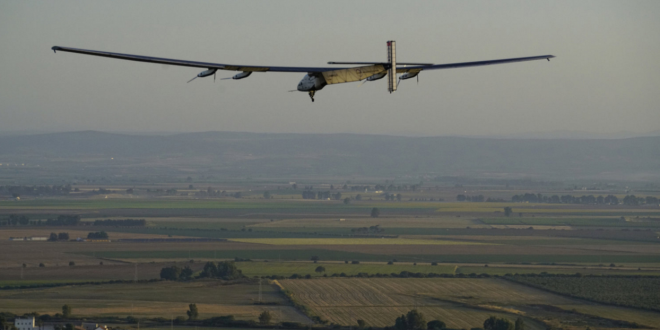 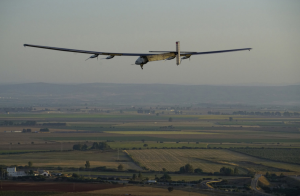 Solar Impulse is a solar-powered aircraft project led by two Swiss pioneers, André Borschberg and Betrand Piccard, with the goal of circumnavigating the globe. One could perhaps call these two men the modern-day manifestation of Ferdinand Magellan.

Solar Impulse 1 was the prototype and on June 23rd, Solar Impulse 2 successfully crossed the Atlantic Ocean—powered solely by the sun, and landing in Seville, Spain. Not only is this a huge step in the future of clean aviation, it is also a huge step for clean technology.

“The Atlantic has always been this symbol of going from the Old World to the New,” Piccard stated.

“Everybody has tried to cross the Atlantic, with sailboats, steamboats, airships, aeroplanes, even rowing boats and kitesurfs. Today, it’s a solar-powered aeroplane for the first time ever, flying electric with no fuel and no pollution.”

It is now official that clean technology has crossed both the Pacific and the Atlantic, which means that the solar-powered airplane is already 90% there to circumnavigating the entire globe.

The flight across the Atlantic was the Solar Impulse 2’s longest flight, clocking in at 71 hours and 8 minutes.

Although that seems painfully long in comparison to the efficient Boeing 747s of our time, the Solar Impulse is not intended to be a template for what is coming in regard to aviation. Rather, it is only an example of how much potential there is for solar power. In the next couple of decades, what we know as aviation today will be revolutionized. What we know as an excerpt from a science-fiction novel will soon be an excerpt from a scientific non-fiction.

Cindy is senior at Henry M. Gunn High School and is incredibly honored to be a part of the Rising Star Magazine team. She enjoys belting out Disney songs, playing piano, watching Chinese dramas, and babysitting. Cindy serves as California DECA's VP of Silicon Valley and is also the singing teacher at FCSN and the President of HEARTS Nonprofit. She can be contacted at cindy@risingstarmagazine.com
Previous What Your Brows Say About You
Next Mythology: The Explanations For Life