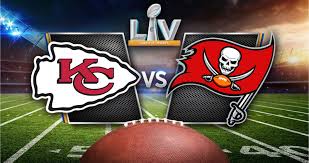 The 2020 NFL season came and went in an instant. On the first Sunday of February, we will witness arguably one of the greatest Super Bowl Games in NFL history. 43 years old Tom Brady the 10x Super Bowl Contender and 6x Super Bowl Champion will be going head to head against the newest elite of the modern generation of football, Patrick Mahomes, who has one Super Bowl and MVP in his first three years. The game will begin at 3:30 in Tampa Bay, the Buccaneers home turf. This year, the Super Bowl will be streaming on CBS. Not only will the Super Bowl and HalfTime Show be covered, pregame interviews will also be live.

This year, the Bucs will be the first team in all of NFL history to play the Super Bowl in their home stadium. The Bucs are completely injury free except for Antonio Brown and Cameron Brate, who were listed as questionable but are expected to play. Something to worry about though is Jordan Whitehead, who will be playing with a fully torn labrum, making him a target for the Chiefs offense to target. The Bucs faced off against the Chiefs in a close 3 point game where Mahomes torched the defence with the Cheetah, Tyreek Hill going for almost 300 yards and 3 touchdowns alone. But, the Bucs offence is also something to be amazed at. Leonard Fournette could be a key player in the Tampa Bay offence. In the postseason, he averaged over 100 yards per game. Simply put, the Bucs have formed an excellent team surrounding the 6x Super Bowl Champ Tom Brady.

The Chiefs will be down one man on the coaching staff in the Super Bowl. Britt Reid, son of head coach Andy Reid and the outside linebacker coach was in a car accident after having a few drinks that night, dealing injuries to himself as well as a 5 year old suffering life threatening injuries in the other car. The only player down for the Chiefs is wide receiver Sammy Watkins who had a calf injury in Week 16. However, one big issue facing the Chiefs is Patrick Mahomes and his toe injury. He will be having surgery on it after the season and we will all see how it affects his mobility in tonight’s game.

Super Bowl LV will be a game of the century. Two incredible teams with star quarterbacks going head to head is something that you normally wouldn’t see.