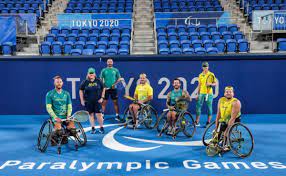 The 2021 Paralympic games finished up events in Tokyo last month on September 5th, 2021. Postponed for a year due to Covid-19, the Paralympics immediately followed the 2020 Olympic Games, which were also held in 2021. There are 22 summer sports sanctioned by the IPC (International Paralympic Committee), including two newly added sports, badminton and taekwondo.  There were 539 total medal events.

The Paralympics has grown from an event held in 1948 by a group of British World War II veterans to a global event providing sporting and competitive outlets for athletes with a wide range of physical impairments, from muscular impairment, such as muscular dystrophy and spina bifida, to amputation, to visual deficits. The Paralympics is usually held every four years, immediately after the IOC (International Olympic Committee) Olympics, in the same city and using many of the same facilities as the IOC Olympics.

While most of the Paralympic sports are familiar, many have a twist to make them equitable for the participants.  Many sports have been adapted to make them wheelchair accessible, ergo: wheelchair basketball and wheelchair tennis. For those who like rough and tumble sports, check out wheelchair rugby, which is played on a hardwood court rather than a “wimpy” soft grass field. Check out the USA vs Great Britain wheelchair rugby finals on Youtube. Other sports, such as goalball, have no “able-bodied” equivalent. It was developed for those with vision impairment where teams of three lie down on the court, attempting to get a ball with a bell into the opposing team’s goal. Some sports only differ from “able-bodied” versions in the amazing participants themselves. In swimming events, some participants have no use of their legs, but full use of their arms, while others have no arms at all, but some use of their legs, and there are variations in between. Of course, everyone has their favorite Olympic sport and mine is Taekwondo, the traditional Korean martial art. As a kick-based martial art, it is especially well suited to athletes having some limitation in the use of their upper bodies. With a few rule changes, such as limiting/excluding head kicks to protect competitors with limited blocking ability, it was easily moved into the Paralympics.

The bottom line is that Paralympics provides an outlet for the human need to compete and excel. These amazing athletes, in many ways, have to overcome more obstacles than their Olympics counterparts and in the process provide a great show every four years.